Dive into the exciting world of the rFactor 2 GT Pro Series, with close and thrilling racing, and incredible prizes, will you become our  GT Pro Series World Champion!

Fight every round for maximum points and move up the grids until you can lift the trophy!

Watch all the action live on twitch.com/rfactorlive and feel the excitement of top-notch sim racing. 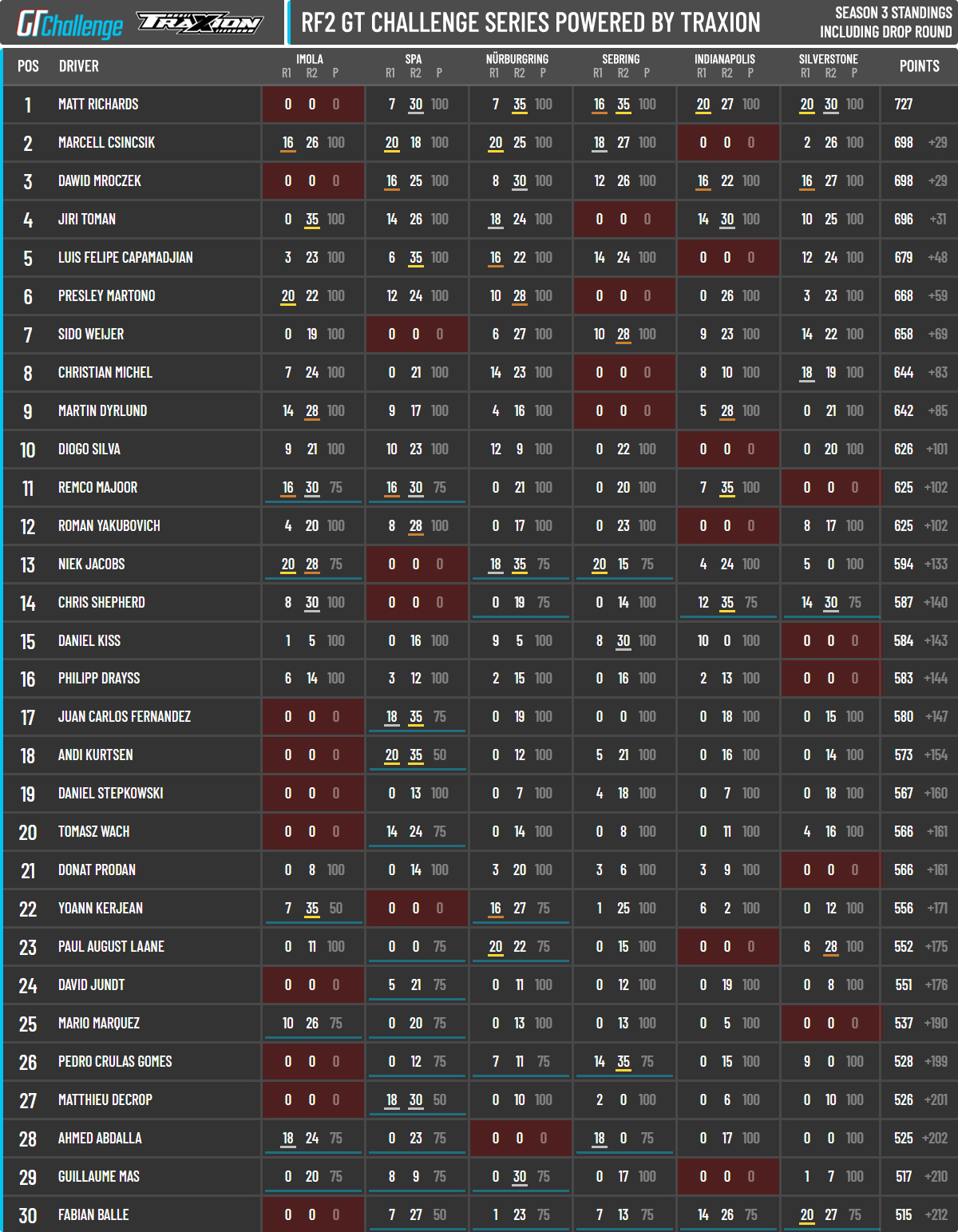 The GT Pro Series races will take part on Monday evenings and will be broadcast on rFactor 2 Twitch.

When the Season is finished (so after the 6 race events) the overall results define the drivers for next seasons Pro Series, it looks like this:

AFTER THE SEASON OF PRO SERIES:
Positions 30 – 26 to drop out of pro
Positions 25 – 21 to go into relegation play-off

AFTER THE SEASON OF CHALLENGE SERIES:
Positions 1 – 5 to go directly to Pro Series
Positions 6 – 10 to go into relegation play-off

The Relegation Playoff is basically a last chance qualifier, to either make it into Pro Series, or stay in the Pro Series.

RELEGATION PLAY-OFF:
One-day race event consisting of 3 Races. Top 5 of that to go into pro, the rest drop out. Drivers dropping out of Pro Series start season 2 in the same way as any other driver, with the need to qualify via the Hotlap Qualifier to get placed in a Split to start the season in. There is no carry-over from Challenge Season to Season.

Also important to know:
There is 1 drop week per season, meaning your worst result in Pro Series/Challenge Series will be deleted at the end of the season. Also the BoP will be reviewed every second race.

Get ready to take on some of the greats in GT3 racing!  Featuring multiple manufacturers, all with different specifications and homologated to create great on track action.

If you have all the content and know what to do enter now. Otherwise read our mini guide below!

What do I need to start?

Before you begin, if you haven’t already, you will need to have a copy of rFactor 2 installed.

Then you will need to purchase the cars that is required for the competition – for the season you need to own all the GT3 that is released and the tracks the series uses.

Once installed, we suggest you setup your wheel and options in single player.

You are ready to go! On the day of the Qualifying, go into the game and go to Competitions and choose GT Challenge Series competition.

Choose your car livery, click on race and off you go.

During the session you can adjust your car settings to your liking. Good luck!

Alongside our code of conduct,  we will use the following exceptions to the standard rulebook. Rules are currently being prepared for a new season

-Weather scripted on race day (announced in a forum post)

Just some hotlap/time trial rules, we will be reviewing all laps that qualify in the top-30 and performing spot-checks, those that do not observe correct driving may have their lap removed or will be disqualified (DQ)