And we’re back, as promised, with an updated Nissan GT500 – there’s a worthy set of improvements and upgrades to get excited about!

On the physics side, we’ve added a new set of tyres, including a full range of compounds for added strategy and increased competitiveness. The previous dry compound is now split into three types – soft, medium, and hard. We’ve also added an intermediate compound for light wet conditions. The all-new audio for the GT500 is a complete overhaul. We’ve replaced all sounds to give a deeper range and a more raw and resonant feel. Full credits for this go to Rick Schoenmaker, who did an awesome job! On the graphics side, we’ve made some considerable improvements and added features, including improved car body reflections, backfire effects, headlight lens flare, and more. We’ve had community feedback from many different people here, and we would like to mention Ales Ogrinc for generously contributing several 3D objects for inclusion in the update. 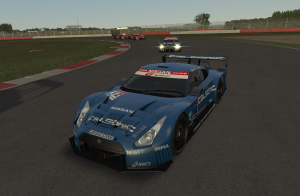 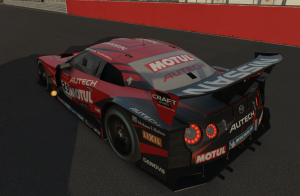 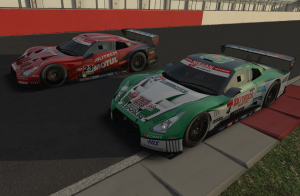 Accompanying this update is a new build: 1108 update 2. Like update 1 we released on December 28th, 2016, this build is fully backward compatible, which means there is no need to update your dedicated server. With this new build we introduce a new system to distribute templates with our cars. As soon as you upgrade to the new build, whenever you start the Launcher, it will install templates into a folder called “Templates” in your rFactor 2 main folder. Do not edit those files in place though, as they will be overwritten on updates of the car. Make a copy before you start designing your own livery.

The new version of the Nissan can be found in the workshop, and you will automatically be updated if you are subscribed to it.