Roadmap-time is one of the best times of the month, even for us! You wonder why?

It gives us the chance to bring together what we worked on, admire screenshots, or just be happy about what we achieved as a team in terms of improvements, new features or content. As we´re developing and working on rFactor 2 basically 24/7, it´s important to also enjoy every little step that we did to make this simulation better. Because in the end, we´re sim racing enthusiasts, just like you!

Alright alright, enough romantic talking about game development, let´s go down to what’s actually happening outside of our continuing work on Nordschleife, UI and the competition system. And yes, it has it all, further improvements, new features and fresh content. 3..2..1.. GO!

Ever heard that 3 is the magic number? That´s basically what happened here. Take the knowledge and technology of McLaren (1), mix it with the heritage and meaning of the name Senna (2) and add the GTR (3) badge to deliver a masterpiece. Voilá, introducing the hottest carbon fibre thingy on rubber tyres that mankind has ever tried to tame on track. 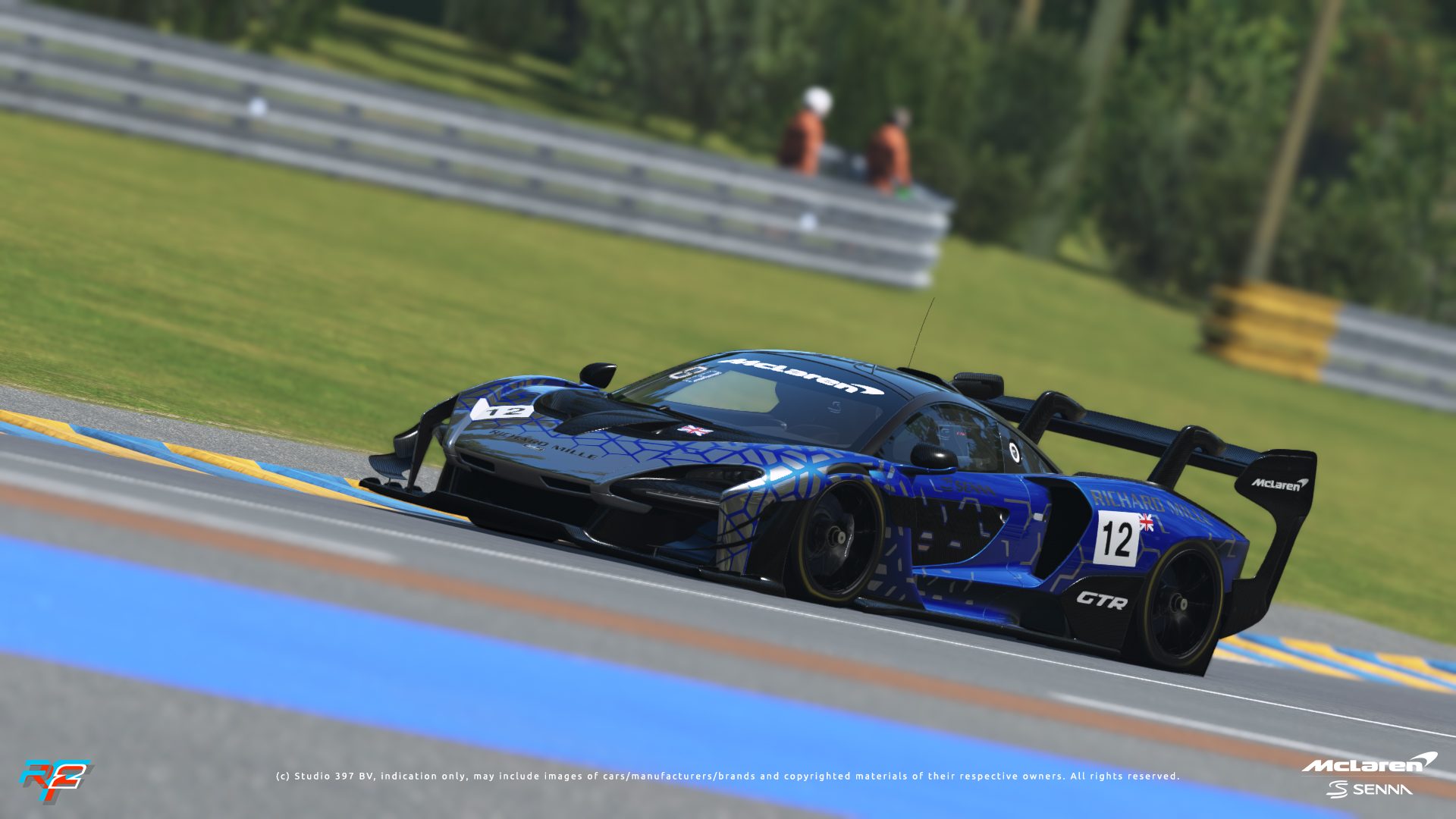 Powered by a 4.0 litre twin-turbo V8, this almost demonic piece of joy can skyrocket you onto the first place of nearly any grid around the world. But the McLaren Senna GTR is not just the track-day car that would be outside most people’s budgets, it’s more than that. It’s our chance as a simulation studio to actually try to have a look into the not-so-distant future and create something that could be the pinnacle of the next-gen sports car racing world.

So be aware, if you unleash this beast, you might time travel! 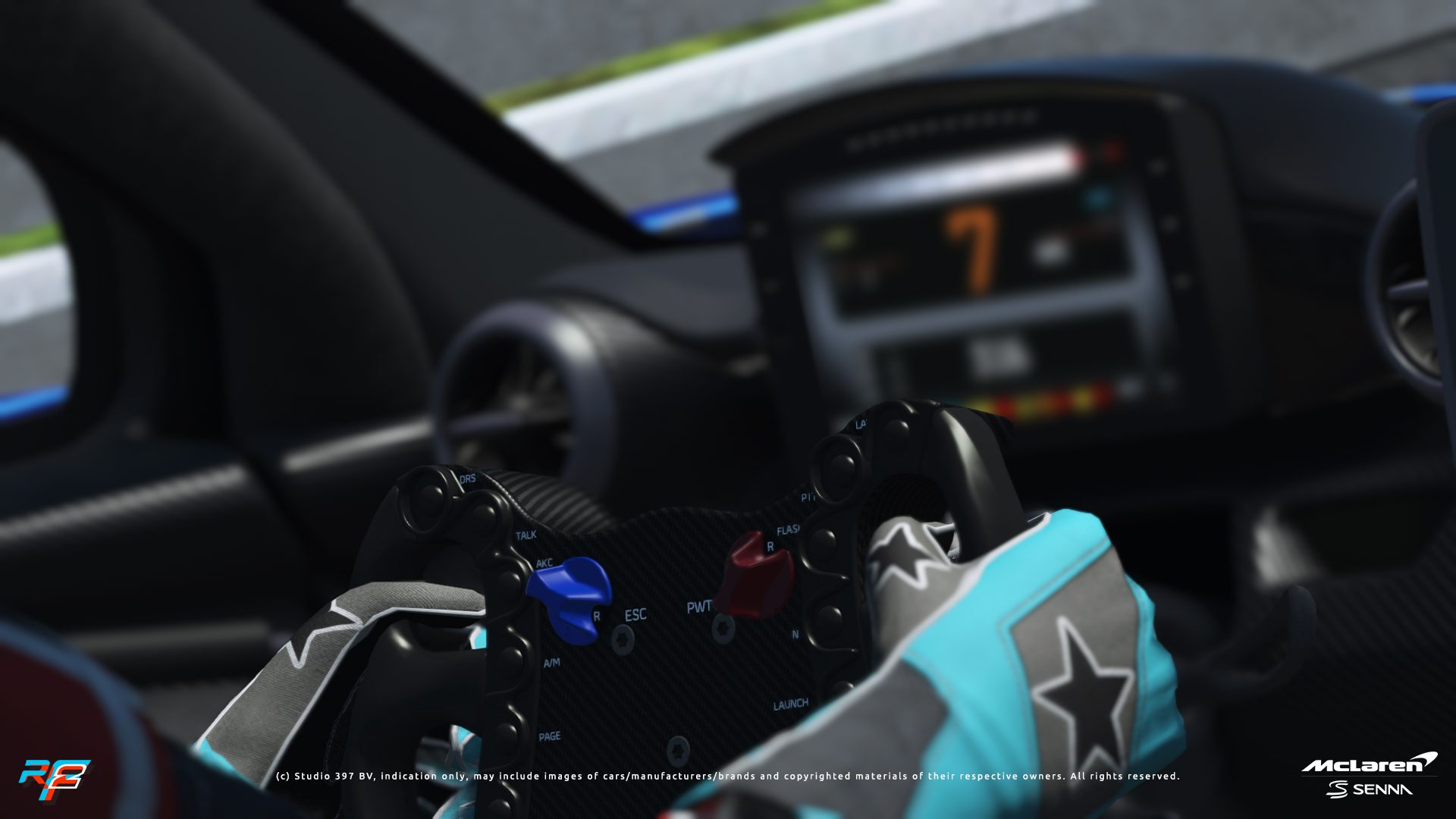 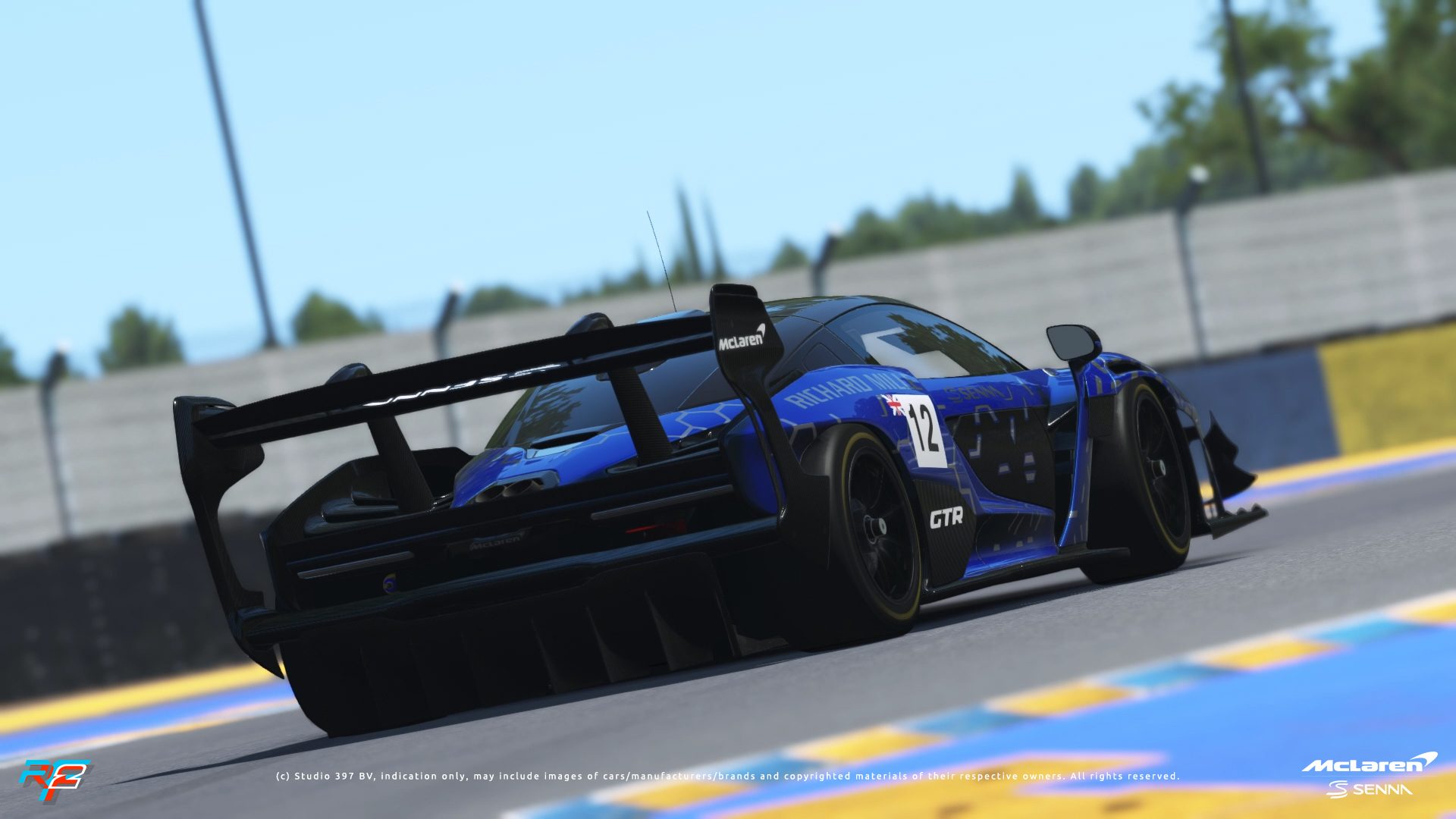 Talking about time travel, the McLaren Senna GTR will be released within the next few weeks.

One could think that with this announcement, we burned up everything we have, especially since 2019 is already half-way through.

But we can assure you, that’s absolutely not the case! There is so much more still to come this year!

And yes, this means that we will also add more rubber tyre thingys that go fast! 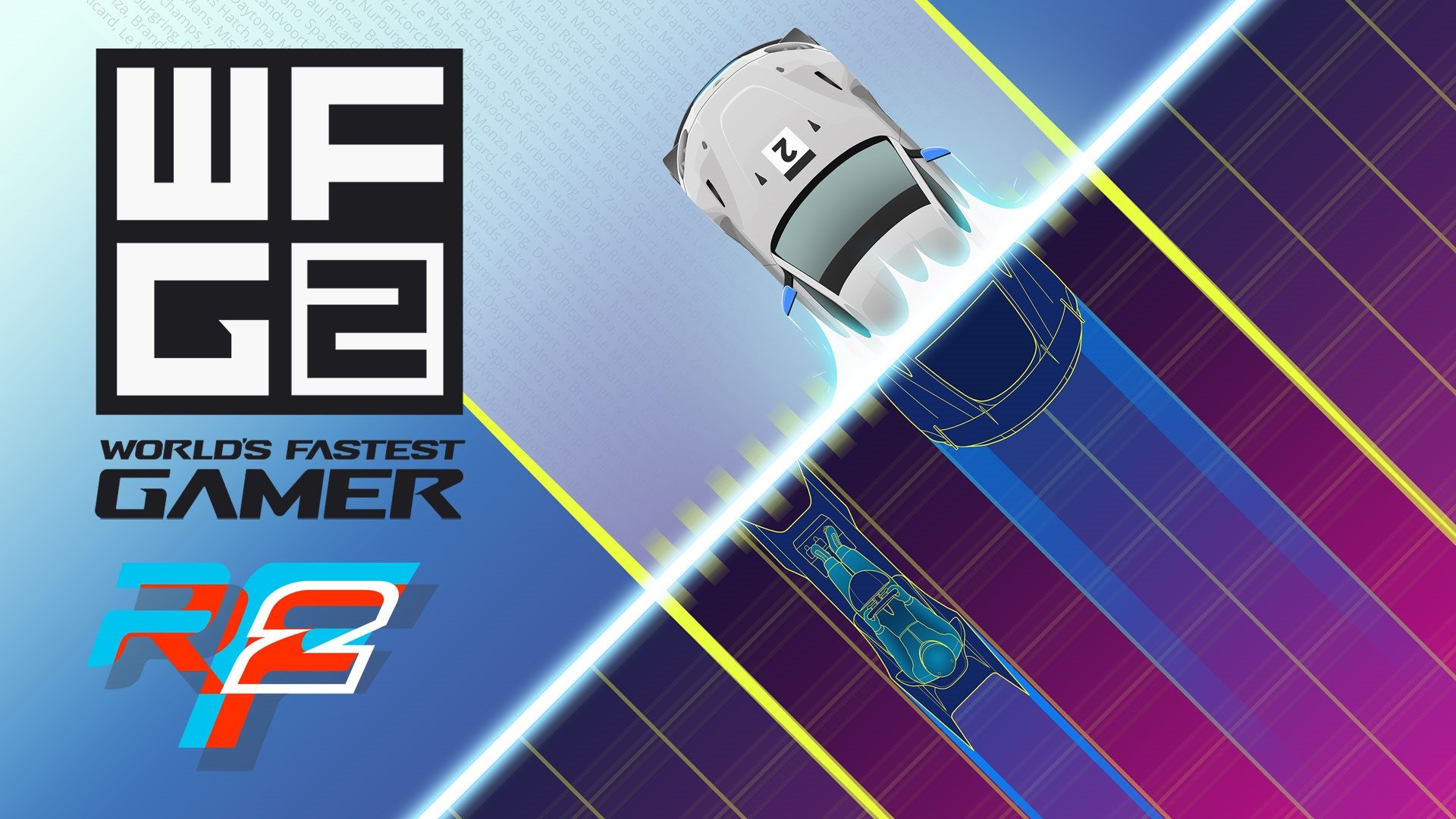 Next week, rFactor 2 drivers will have the chance to qualify for the World’s Fastest Gamer Grand Final via an online time trial run on the Sebring International Raceway course with the Aston Martin GT3, running from August 5 to 18.

The top 20 racers will then do battle in a live-streamed, 40-minute race on August 24th. In addition to earning the chance to chase the full-time real-world racing stint worth more than US$1 million, a US$10,000 prize pool will be up for grabs in the final race. Incredible stuff!!

The winning rFactor 2 driver will join eight racers hand-picked by the World’s Fastest Gamer judging panel plus the winner of the Gear.Club mobile game time trial.

Look out for more details soon. In the meantime, check out the WFG website http://wfgamer.com/

While we’re at it, let´s also announce an esports live event with Porsche! Yes, the company that makes all the great race cars we admire. We can´t say more yet, but don´t worry. As soon as the lollipop man lifts, we’re ready to launch more info onto the pitlane.  That’s not all, McLaren Shadow kicks off again soon. We will bring you more news on that shortly!

A little under four weeks ago, we hosted the rF24, an endurance race with many high-profile teams and drivers participating at Le Mans. Roughly half-way through we had to red flag the event because of technical issues. Immediately after the event, we released an official statement and started gathering information from all the participants and set out to try and fix these issues with a special task force. It’s time for an update now.

In the months leading up to the event, we were already investigating and improving issues some people were having with the physics calculations “freezing”. In investigating that issue, we built a very detailed “stopwatch” system that we could use internally to exactly pinpoint where these delays occurred. We learned a lot from the “logs” that our community submitted and found multiple issues. For one, our timing, code that had been part of rFactor 2 and many ISI-based sims before, turned out not to be the most efficient and reliable way to run something at 400 Hz (and 2400 Hz for the tyres). We rewrote that code, and after several stages of testing these revisions made it into the release. A second issue we discovered had to do with plugins that were taking too much time. We give plugin authors a lot of power, running plugins directly as part of the physics thread, but as you know, with great power comes great responsibility, and unfortunately in some cases, plugins don’t behave nicely. We’ve blacklisted a few plugins and are talking to authors to help them improve. A third issue was in how we sometimes talked to Steam, which has led us to rewrite that code and convert it from a plugin to internal code. We are still diagnosing more rare issues, and there is a forum thread that explains how you can submit your logs for review.

Now during the event, we ran into issues that have plagued us before, but never this severely and never in a way that we could reproduce. However, we now had so many people reporting issues that we started to see some patterns, so the first step we took was to analyze exactly what had happened. We took our time, collected a lot of data from participants, for which we are very grateful, and then started to try to reproduce specific problems.

The first issue we could reproduce were join lags. Someone would (re)join the server, and this issue then propagated to all other clients. We discovered that this would happen whenever someone rejoined the server using a car with different upgrades from the ones he used before (such as forgetting to select the low downforce upgrade). Our first fix was to add code that would not propagate such (wrong) upgrades to other clients. We then quickly confirmed that these join lags were indeed gone, which was a big improvement since these were causing all kinds of other issues as well.

When exploring this first issue, we discovered that it was currently possible to rejoin not just with the wrong upgrades, but even with the wrong livery or even the wrong car, and this was not handled correctly in the code. We saw this cause issues where you ended up with the wrong set of physics because of the upgrades and the server re-applying the same setup you had before, but to a different car. We also saw issues where a car would appear in the garage for some, but on the road for others, and a few other variations that were all caused by the same problem. We decided to solve this in two places. First of all, we now double check when you rejoin that you indeed have exactly the same car, livery and upgrades again. If you don’t, rather than letting it cause problems, the server will boot you and tell you why it did so. Secondly, we added code to the client that, when you connect to a server, will check if your intention is to rejoin. If it is, the server will now tell you directly which car, livery and upgrades to use, and we will simply show you that car in the UI instead of letting you choose anything. We also decided to make the rejoin check a bit more lenient in that you still need to rejoin with the same driver, but this driver is now identified via his Steam ID, meaning that in the case of a hardware failure, if you have multiple installs of rFactor 2, you can even take over on a different client and resume the race.

Another, slightly unrelated, issue we looked into was loading times. The good news here is we’ve found some improvements and our upcoming release will roughly halve those loading times. We’ve seen numbers being reported by testers indicating a 40-50% improvement.

Other issues still on our “fix list” are a somewhat smaller lag some people are getting when someone leaves the server as well as a few usability issues, such as the fact that if you got a disconnect right before you made a pitstop, you basically get a car with no fuel when you rejoin, and you have to try and drive a lap first (which will likely fail).

Right now our intention is to release the first of a series of updates as soon as this rejoin process is “bullet proof”. We are going through a series of tests, each with a bigger set of users, until finally we are confident that we squashed this. Our current estimate is that this first update will go live sometime next week. We won’t stop there, and remain committed to making sure everybody has a good experience racing rFactor 2. Of course, we will also do a re-run of the rF24 when we feel these issues have all been resolved and tested.

We’re looking forward to once again attending Sim Expo this year at the Nürburgring, as usual with a few surprises up our sleeves!  Make sure you come and visit us and say hi! 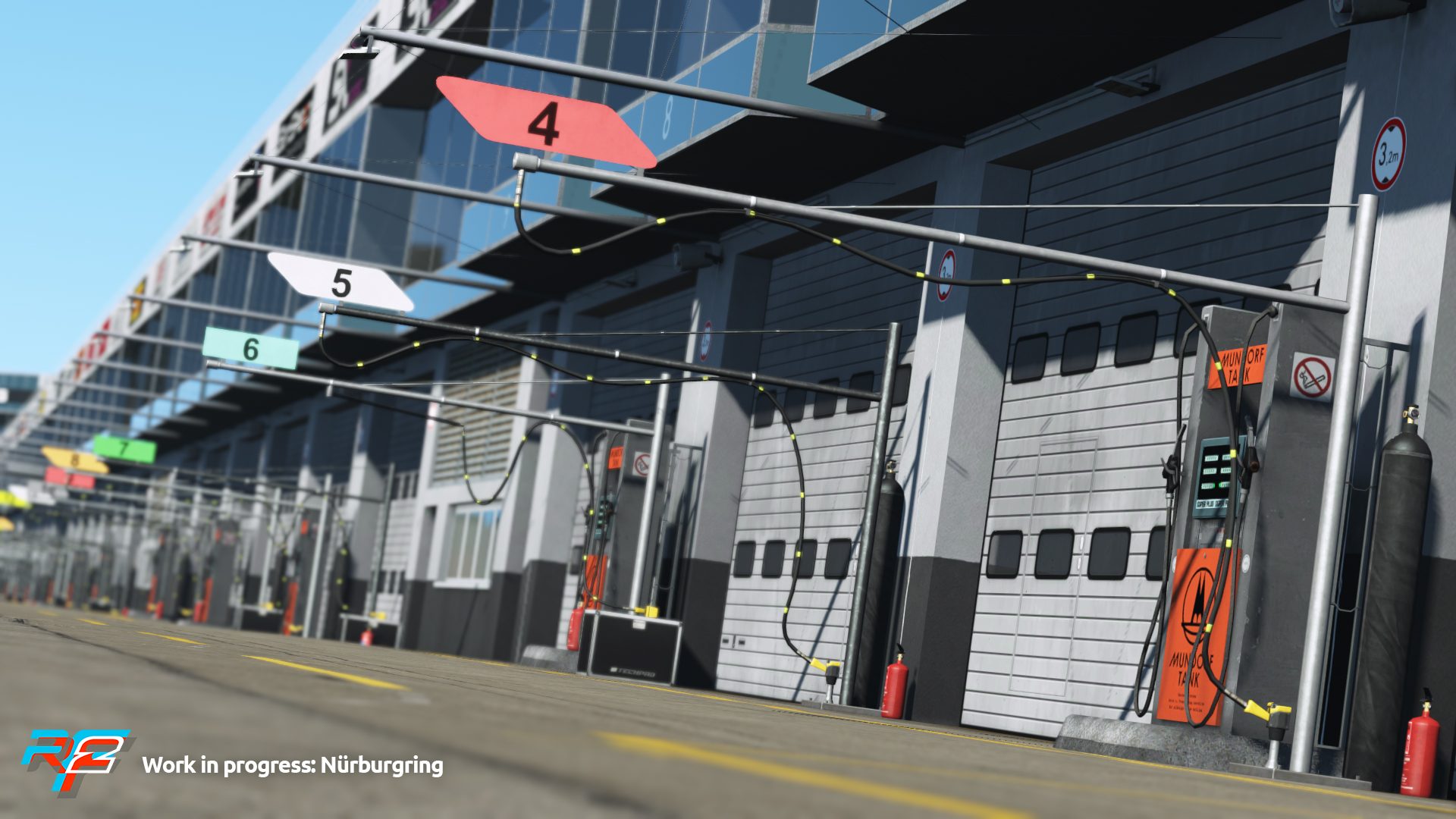 Official Statement about the rF24 rFactor 2 and World’s Fastest Gamer team up with Rudy van Buren!