And now for the big one, Sebring! Since taking over the development of rFactor 2, our goals have been clear: take an already incredible simulation as a base and move the bar higher, push new and exciting features that you want, and give you the chance to experience a professional grade simulator – at home!

So this track release is more than just “a track release”. It’s a milestone for our team in what we’ve set out to do. The level of fidelity and road feel is above and beyond anything that’s out there, and we’re boldly confident you will agree. Of course we’re excited to say the track was created using an extremely detailed laserscan – but it’s not just about the laserscan itself, it’s about the way we utilized the data and converted it into usable detailed information that gets back to the force feedback in your wheel, something that has not yet been done in rFactor 2 at this level. We feel we’ve achieved our goals in the high level of road fidelity thanks to some innovations and, of course, rigorous testing. The end result is… the ‘FFB’ doesn’t lie – you’ll feel every crack in the pavement and every undulation in minute detail. On the straights and as you dive into each turn, those subtle nuances in the track surface will give you the precise control and muscle memory that a real-life driver would have on track. Our development and test teams have all become addicted, driving endless stints and trying to get that elusive extra tenth or even hundredth of a second!

Buy it over here right now! On the visual and graphics side, we’re just as excited and pushing ahead. We’ve paid close attention to those essential details that add to the overall immersion. The road surface itself is very precisely modeled on the real thing, with every crack and repaired and re-repaired crack. All the nuances and color variations as well as the overall worn-down, characteristic look from years of racing help to really convey the atmosphere. And with an ultra high level of trackside objects in the environment, from spectators to campers and vehicles, there’s a real ‘track vibe’ from any camera you’re viewing from, which makes watching an online event that much more exciting. Of course, as always, we’ve kept in mind scalability for performance. 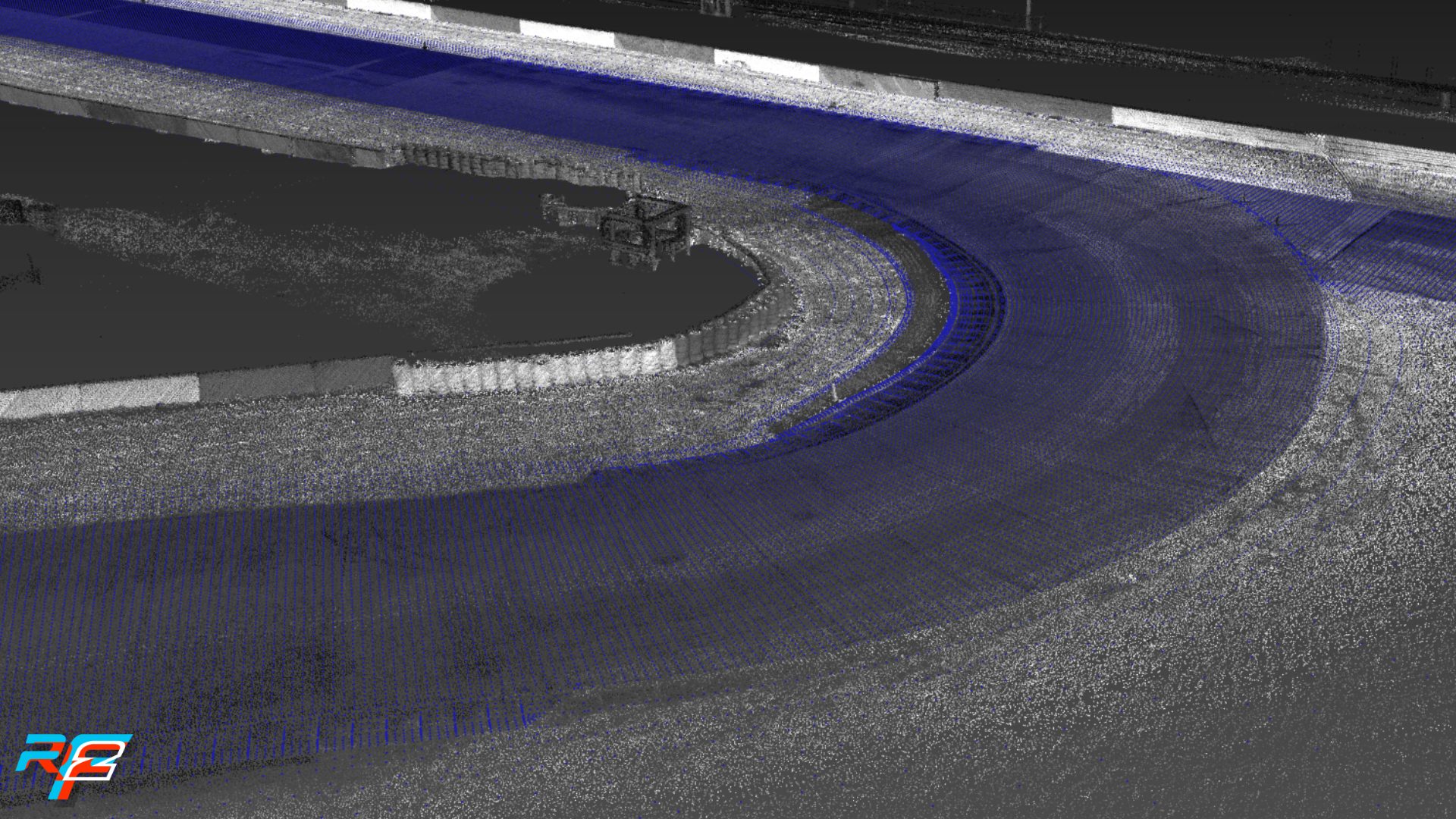 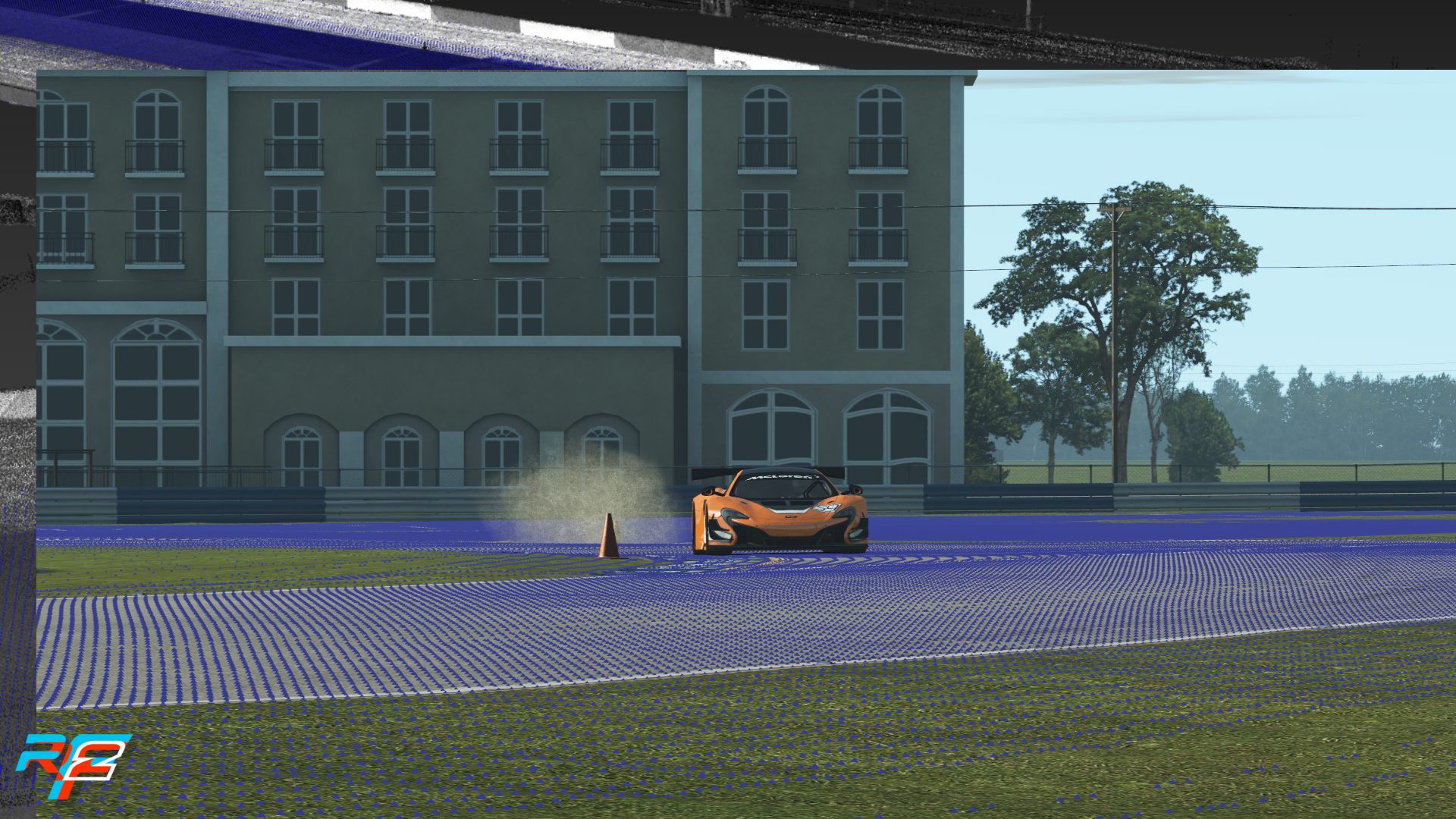 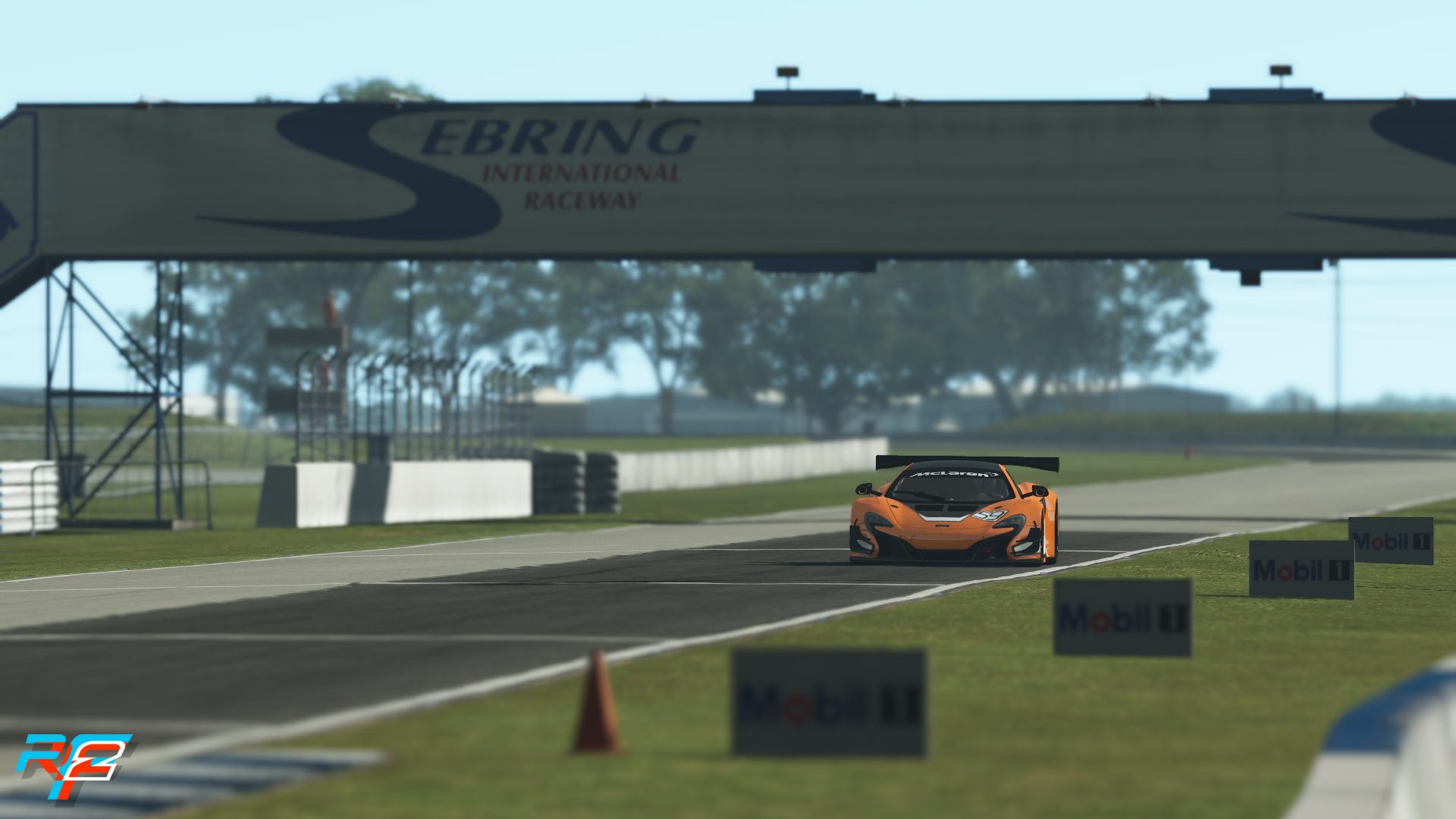 So today we release to you Sebring. The main layout is available in two versions. One featuring the 12-hour race layout, with a packed infield and a lot of spectators, and another that gives you more of a “track day” feel. On top of that we also included two shorter layouts: School and Johnson Club. These layouts are very well suited for smaller fields of cars and somewhat slower cars.

Sebring is completely laser scanned in location, through professional high density, high accuracy, laser scan equipment. We scanned the track just a few weeks before the 2018 “12 Hours Of Sebring”. We then processed, filtered and optimized all the data to produce a clean stream of points for the simulation. We used that data to describe and model everything from centerline to first barriers, so even if you put your tires off the grass, you’ll still get a complete simulation of the grounds, through both physics/FFB and graphics. 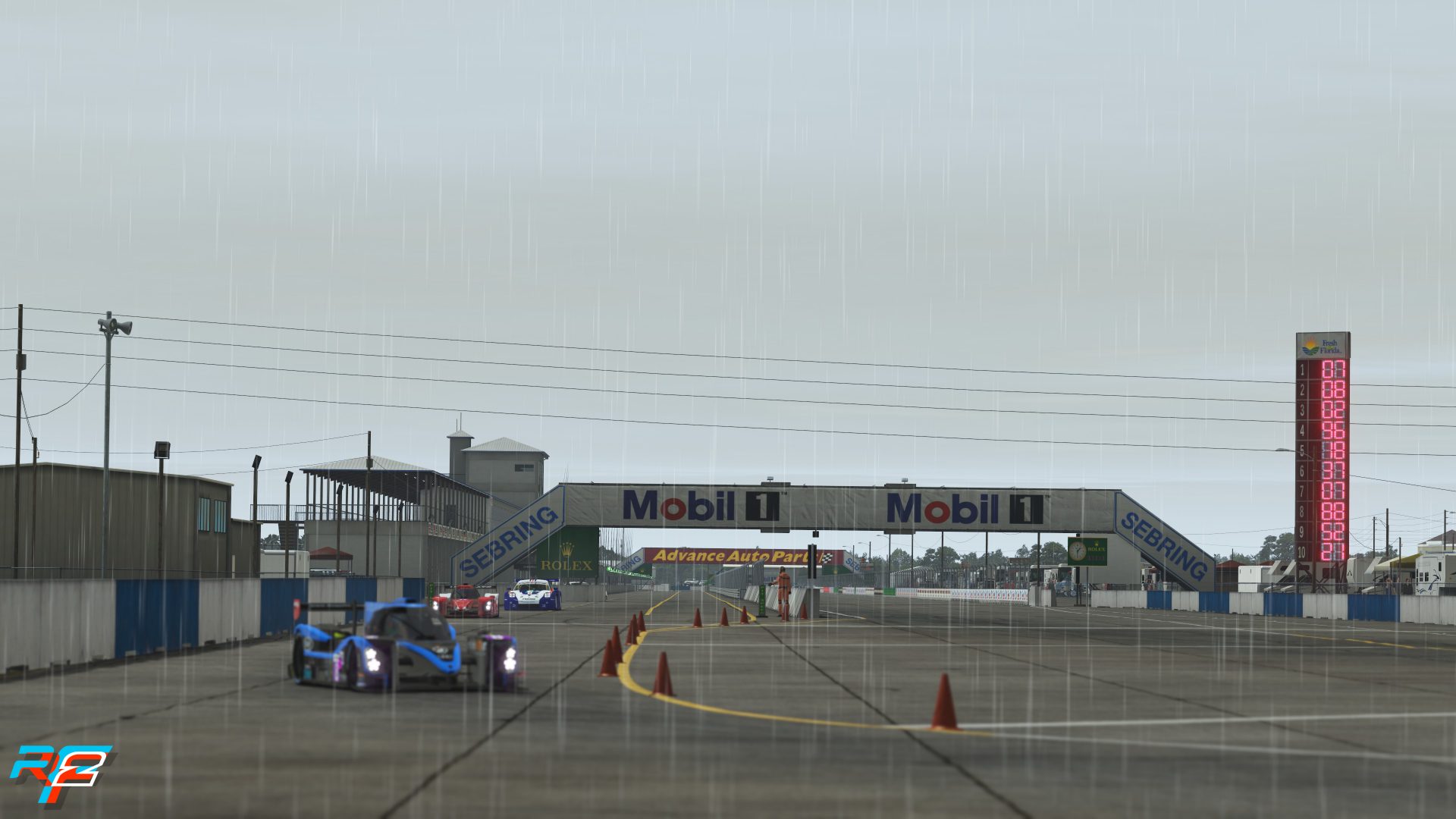 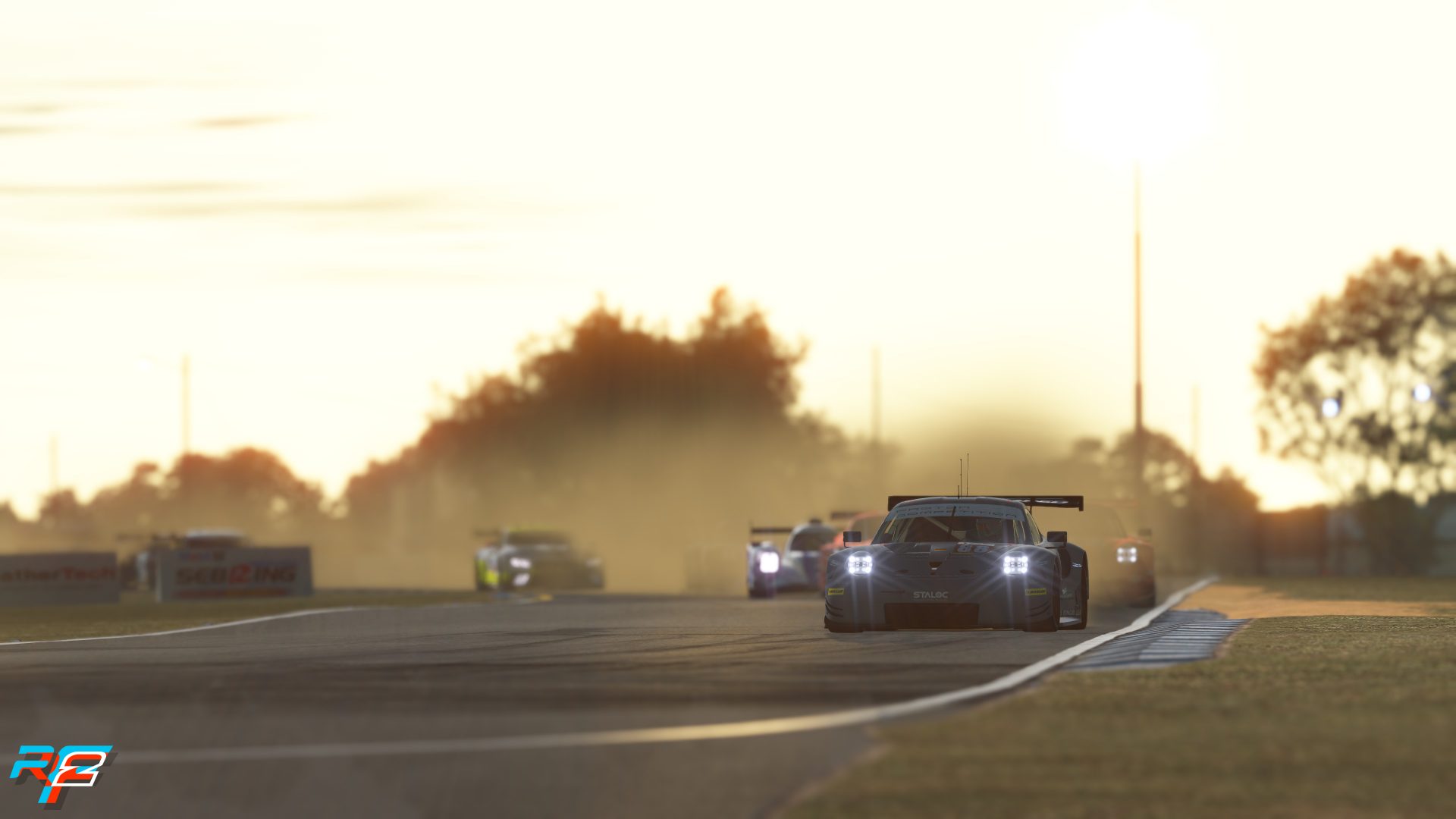 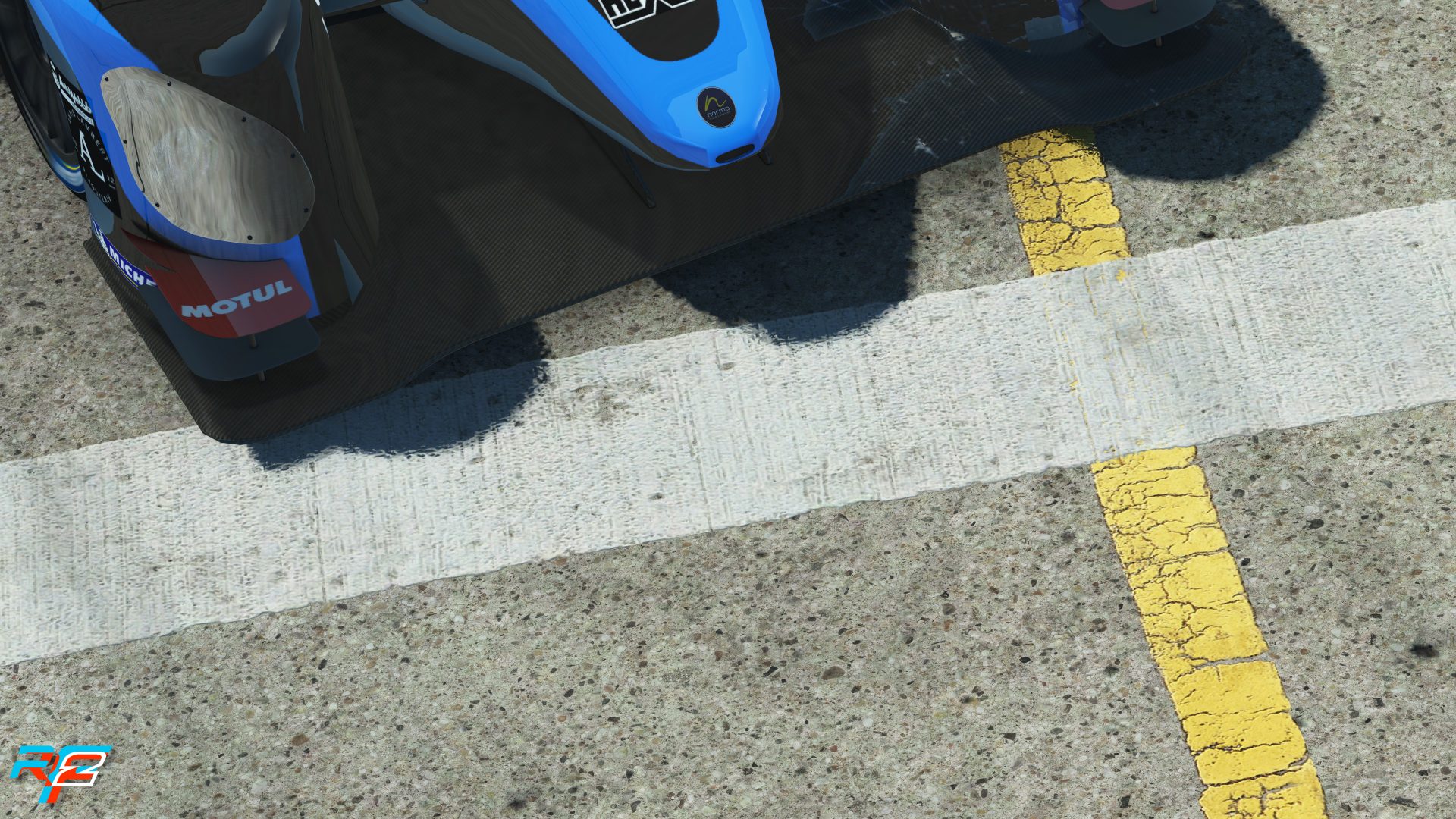 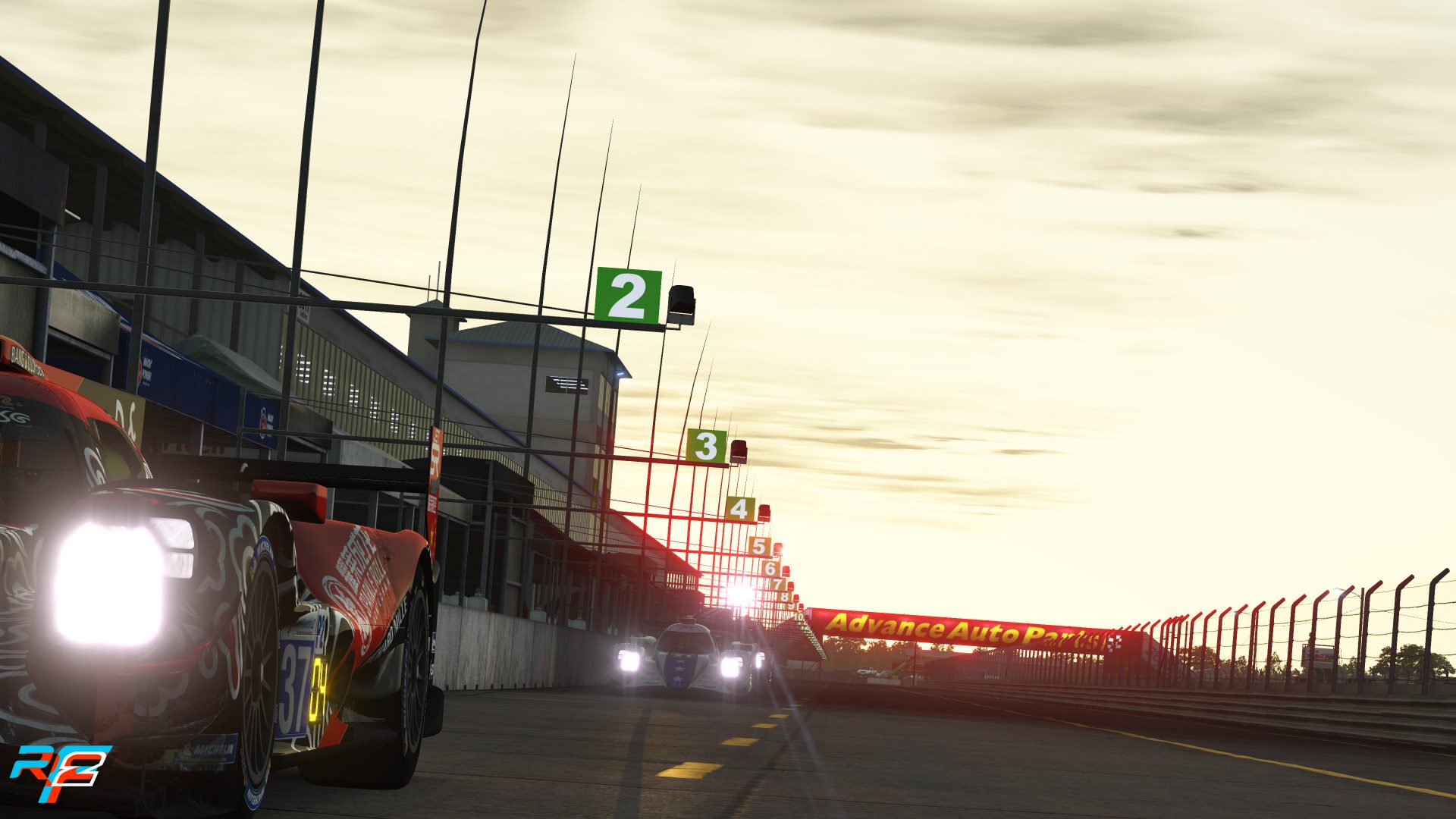 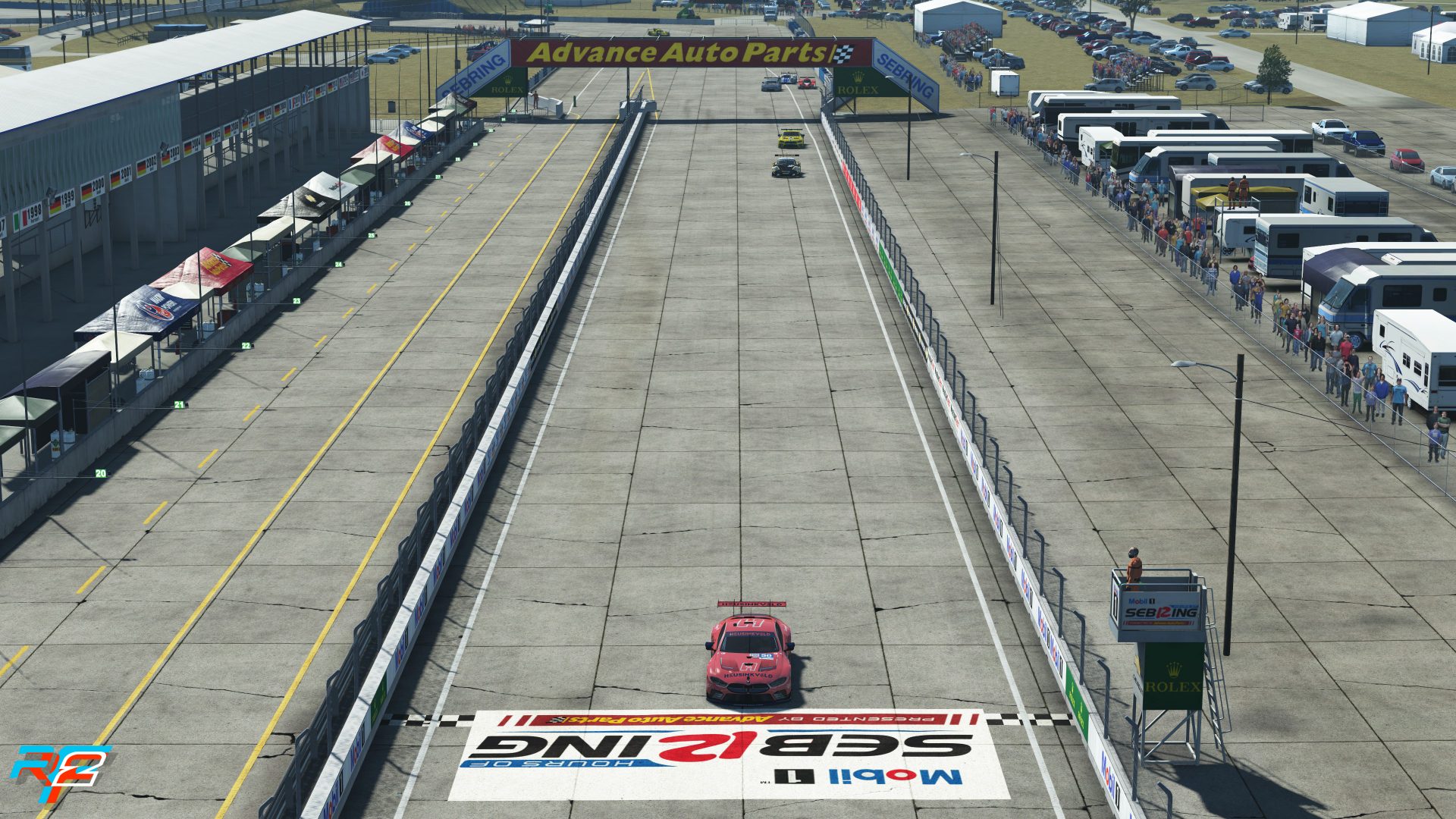 The Sebring race track is built on the site of Hendricks Army Airfield, a United States Army Air Forces training base for Boeing B-17 Flying Fortress pilots in operation from 1941 to 1946. Sebring as a well known racetrack has a long and colorful history, dating as far back as 1950.

The brain child of Alec Ulmann, a Russian entrepreneur, who had a unique vision of the old airfield. As a motor racing aficionado, he saw an airfield and its access roads combined as one whole ‘racetrack’, full of potential. This is part of the main reason even today that Sebring remains a very engaging track to drive on.  Although lacking in any real elevations, the combination of surfaces that alternate during a lap – part road, part airstrip –  become a uniquely challenging and varied set of turns with a rhythmic and enigmatic flow. In short, it’s hard to explain why it’s so fun to drive, but it just is.  Sebring is a track with ample room to race, and yet it still doesn’t feel spoiled with miles of runoff.

And today, decades later, the tradition of racing passion continues unbroken, with most notably the “12 hours of Sebring”. “America’s oldest sports car endurance race” – currently in its 66th year – is where some of the best world class multi-class racing can be found! 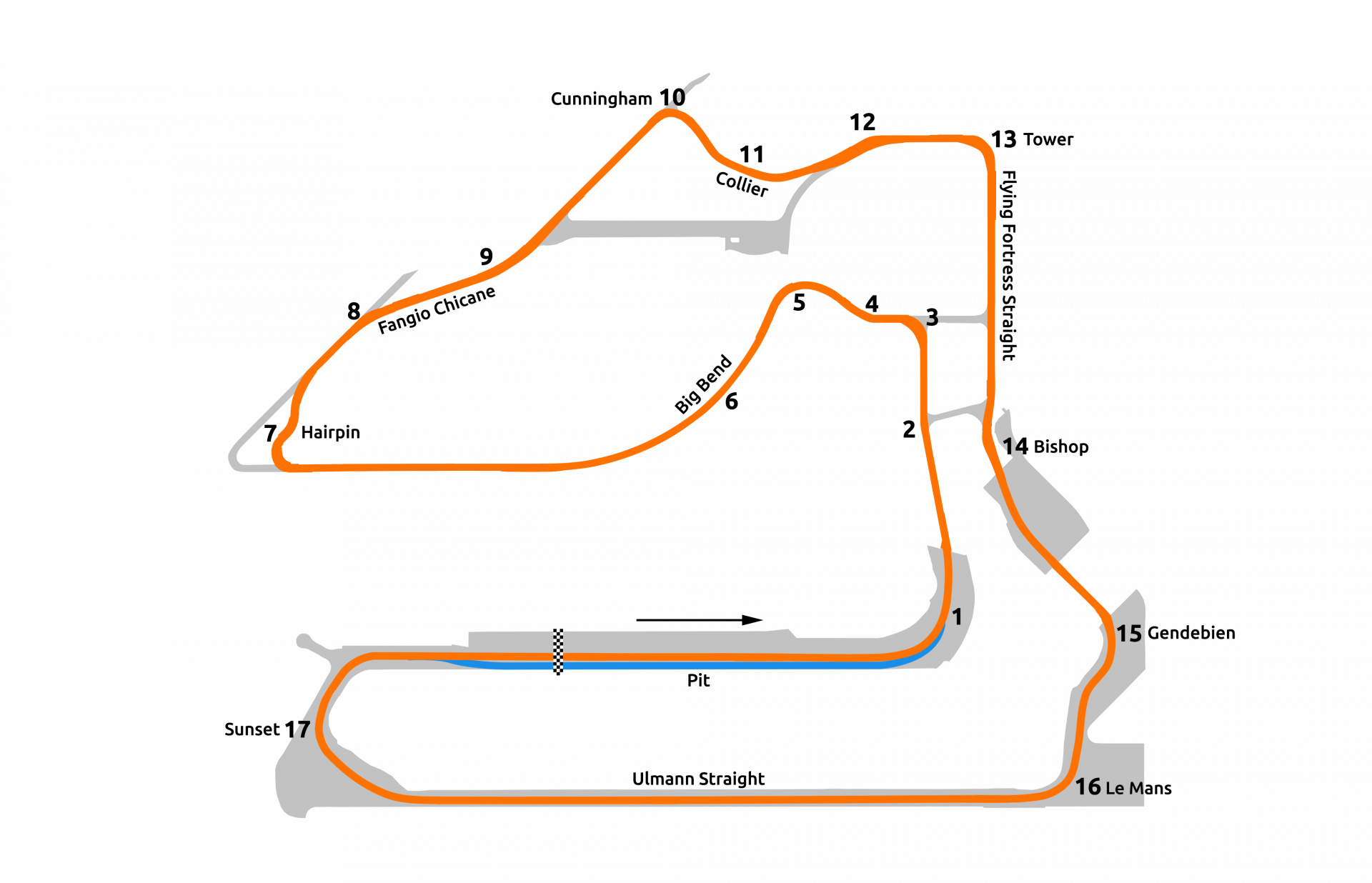 Sebring’s first turn gets you right into the mind set with its undulating concrete surface: it is extremely bumpy, fast, and blind ! On entry, stay as far as you can on the outside right without clipping the pit-wall, and dive into the apex while staying heavy on brakes. It is key to keep the brake pressure steady as you ease into the inside wall apex. If you manage that, you’ll be able to floor it out and sail onto the tarmac section. Take it wrong and you’ll watch helplessly as your car slowly drifts to the outside. Sawing and the stabbing brakes like a maniac won’t always help you to avoid ending up on the dirt and grass. It’s a fine line!

Just off T1, if you made it safe and sound, you’ll need to quickly gauge your speed into the incoming chicane-like series of bends. Key here is ease it in, stay one gear higher to keep the car settled to avoid snappy rear oversteer. Hold a steady amount of throttle, utilize the suspension roll to glide through and accelerate out onto the big bend in one swooping motion. Carry too much speed and you’ll most likely end up visiting the grass outside of T5, too little and you’ll bog down and lose momentum.

Once you’re safely through T5 you’ll have space to make an easy pass if you’ve carried slightly more momentum than the cars in front of you. Here on the Big Bend full throttle is essential – but keep your wits, and prepare for the hairpin that comes up quicker than you think. The hairpin at Sebring, as you can see by the enormously generous runoff, has seen many cars obliviously fly off as if brakes were not even a thing. This short concrete section will easily catch you off guard. Overestimate the braking zone and a lock up is a certainty. It’s a deceptive entry and oh-so-easy to get wrong, even after you’ve taken it hundreds of times.

Just out of the hairpin you’re quickly back on tarmac. This transition needs to be taken into account, a slight bit of over throttle and you risk losing the back-end completely. If you’ve hit it just right, you’ll see a big boost by getting on throttle early. The short abrupt bend of T8 can be taken full on, but keep your trajectory as straight as possible just until you need to start merging right onto the iconicly named Fangio bend…

This next pair of tight snappy off-camber turns is easy to get wrong, but exhilarating when you hit it just right. The trick here is to brake a touch earlier and keep enough rolling momentum while retaining the minimal amount of lateral grip to stay on track. Avoid clipping the inside right curb of T10, and progressively ease on the throttle just as you reach the apex of T11, at this point you want to squeeze hard with max throttle with quick up-shifts going into T12.

Turn 12 is somewhat easygoing, but watch the front end lift during up-shifts. For that short moment you can accelerate and hammer up through the gears. The right angle turn ahead will make you pay dearly if the car isn’t settled by the time you’re starting to brake into T13. Keep an eye on the outside left curb on entry. If you hit it fast enough, chances are you’ll snap over-steer even before turning in. In T13 you want as much coasting speed as possible with minimal braking. Again, avoid the inside right curb, but get as snug to it as you can to maintain a smooth arc and consistent exit speed.

Flying Fortress Straight just off T13 is a good place to look for a clean pass. Here, you’ll edge up into top gears, and just as you have to slow into T14, a very harmonious and gradual series of esses leads into T16. For this last turn onto the Ullman straight, you’ll need to dip just outside on the left side before taking the last mid-speed right hander. Let the inside right curb help rotate in, then be aggressive on the throttle and ride the left-hand exit curb. Keep in mind the outside part of the curb slopes away and will send you into the grass if you hit it while slamming the throttle.

Turn 17:  The Sunset Bend, Hail Mary or Mind the Bump

Known as the sunset bend, this is one of the most iconic turns in motor sports. With its teeth-rattling concrete slabs and its vast open space, it lends itself to some very spontaneous and creative racing lines, on entry and on exit, not to mention the mind blowing passing situations. The key here is understanding the terrain and knowing how to manage the big bump at the apex: braking hard and late into the turn, hugging that first right-hand wall and modulating the brakes for what seems like forever.  You need to ease into the invisible apex, letting your intuition and gut feel guide you more than your choreographed memory.  Each time you take Sunset, it’s a new experience to some degree, and it leaves you always feeling you can do it better, motivating you to keep pushing ! 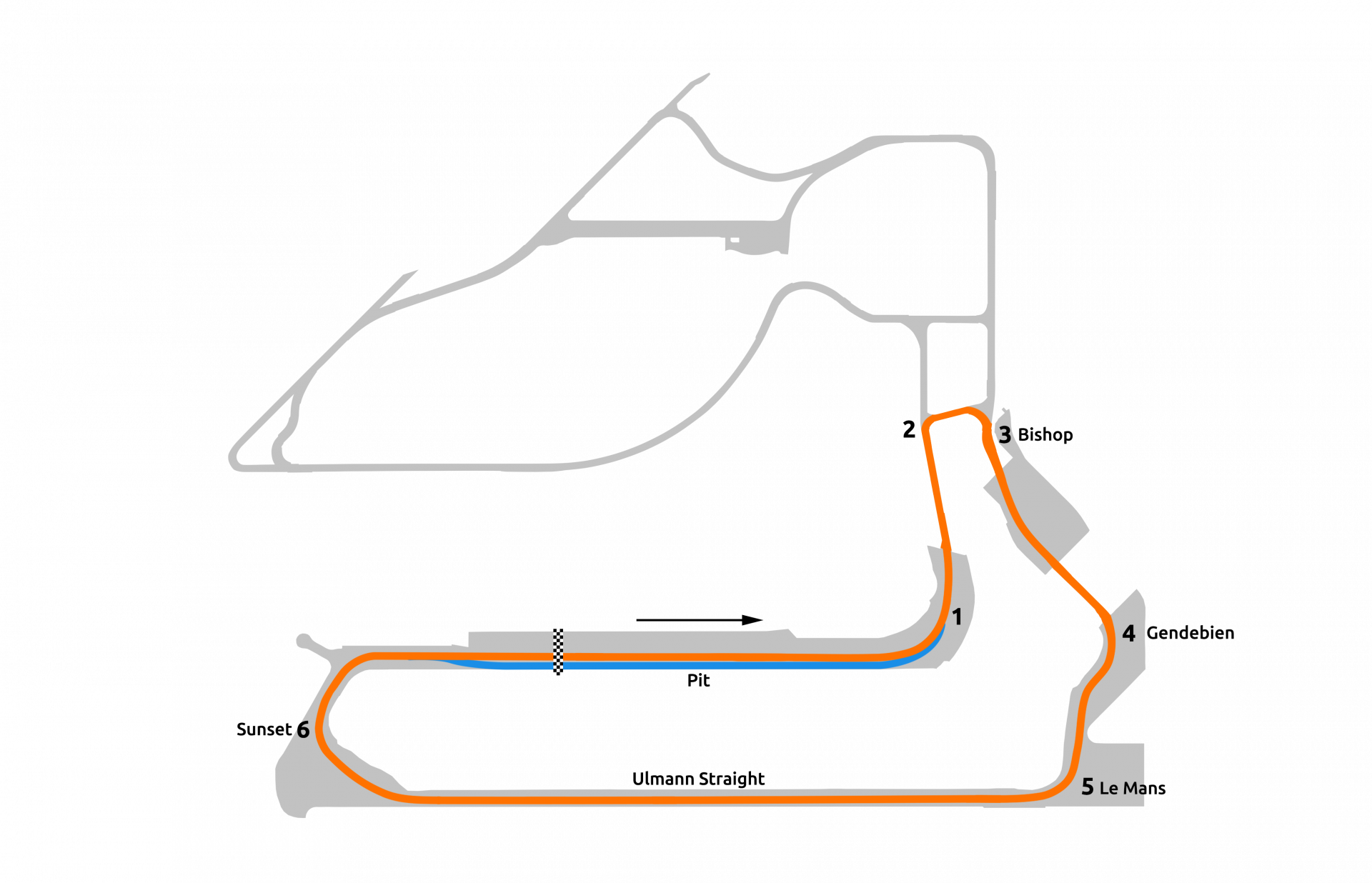 The School layout is 3.22km with a of a total of 6 turns and shares the lower half of the track layout with the full 12 hour, as well as the same garage and pitlane.

The first turn at Sebring School layout is the same as the full 12 hour, however you need to be much slower into T2 and T3 that now become a short snappy pair of right hand turns onto the T4,T5, and T6 (which are the same as the 12 hour T15,T16,T17) 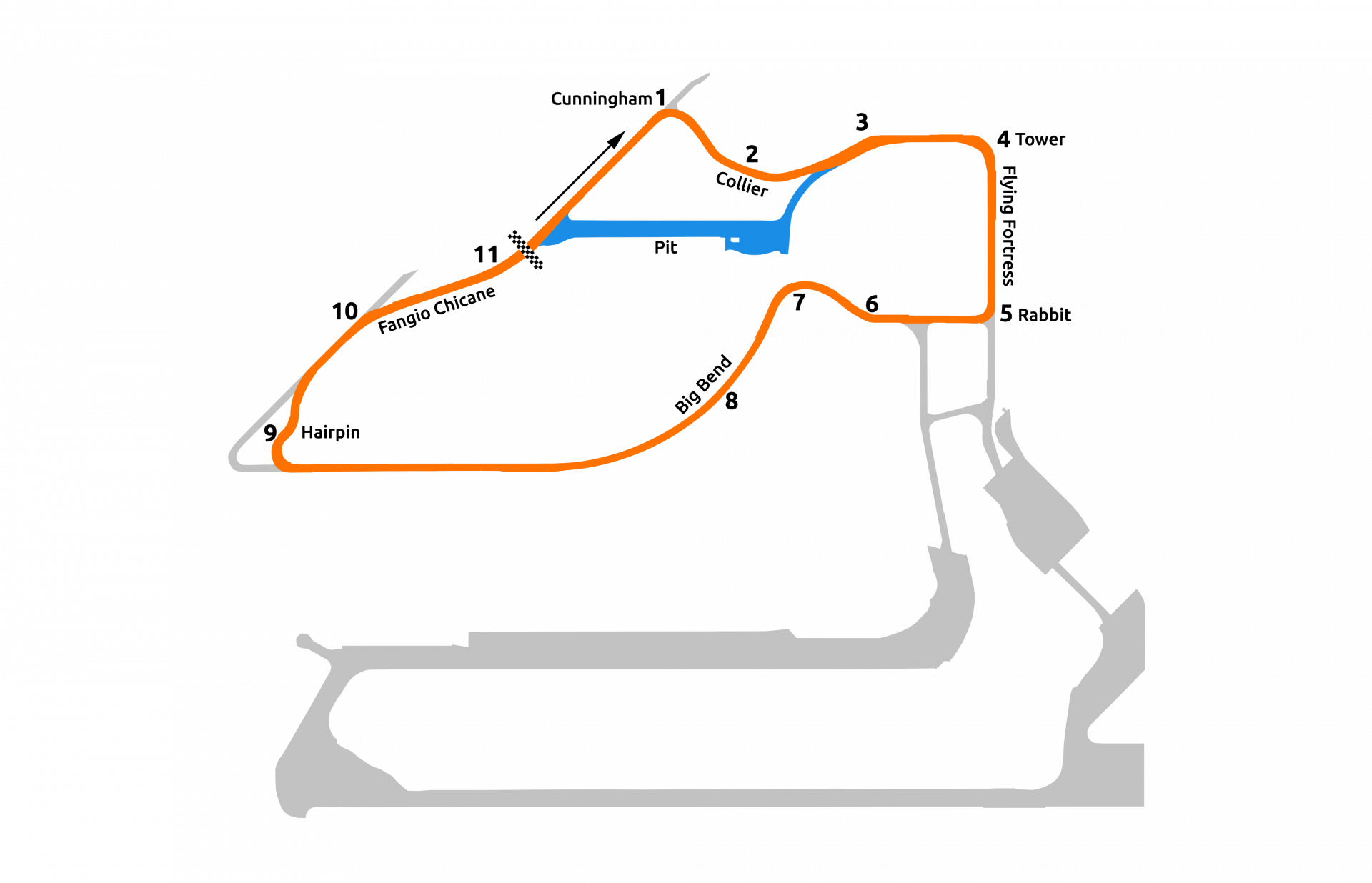 The Johnson club layout is 2.47km with a total of 11 turns and shares the upper half of the track layout with the full 12 hour. It has it’s own alternate garage and pitlane.

With Cunningham and Collier becoming the first turns, the flow of the Johnson layout makes you feel like it’s in another track altogether.  Flying fortress Straight is shortened and leads into the new turns 5 and 6 then back onto T7 and into the Big Bend.