Welcome to the Ring!

Located in the Eifel region of Germany, the Nürburgring can easily be described as one of the most – if not the most – iconic race locations on the entire globe. Built right into the trees and the ups and downs of this lovely countryside, the Nürburgring offers a challenge even to the absolute best of the racing world. The two circuits, Nordschleife and Nürburgring GP, have seen the greatest of motorsport over the years, but they are also places for amateur drivers from all over the world to get their dose of track driving and to follow the same roads their heroes did or do.

Bringing such an icon to rFactor 2 is a real honor for us. Just like our playerbase, we always dreamed about taking the virtual cars onto the Nordschleife or Nürburgring and just enjoy pure driving. Experiencing this track during development was absolutely special. Every motorsport fan knows this track and has seen plenty of footage, especially from the remarkable 24 Hour event. Working on bringing it to life in our very own simulation and then being able to even drive on it was a breathtaking moment for the studio. Bit by bit the wireframe turned into the best playground we could think of. The laserscan we used is from 2018, making it the most accurate and modern representation of this holy grail of motorsport history and also modern times. Like so many other simracers, we visited the track during Simracing Expo or even just in our free time, being captured by the mythos and the feeling you get just by being close to it. And now it’s finally in rFactor 2, for you all to race on and enjoy.

The Nürburgring’s story goes way back, all the way to the 1920s! Its home is in the town of Nürburg, Germany, and although it has weathered the decades of the past, it has come out intact and today has transformed into a vast motorsports complex with a capacity of over 150.000, with a fan-base that’s arguably one of the most dedicated and die-hard in the world of motorsports.

This initial release features no less than four unique layouts, with more to come later as free upgrades.

The now almost ancient Nordschleife “North loop” dates back to the roaring 1920s ! Meandering its way through the countryside and circling the medieval castle of Nürburg and its small village, the Ring’s roads and sharp curbs snake around the idyllic and bucolic Eifel landscape. The full Nordscheife loop is 20.8 km with a jaw-dropping 300 meters of elevation changes.

Among modern, well-known tracks, this Grand Prix track, which was built in 1984 and used for Formula One up to 2013, remains a great venue for modern racing. The Grand Prix is a very technical track that requires acute timing and precision. Its iconic sharp first section of turns is a real test of braking mastery.

The 24 Hours Nürburgring layout is 25km of grueling endurance. The layout starts on the Grand Prix circuit and then transtions to the North loop. Skipping only the Mercedes Arena section of the Grand Prix, it uses most of the two layouts. The modern and old clash, but co-exist in a way that gives this immense layout its unique character. Part technical, part old school, the 24 hours layout is the ultimate test of flexibility and skillful racing for anyone calling themselves an endurance driver !

The ‘Combined’ layout is a close cousin of the 24 Hours layout. The only difference is it includes the Mercedes Arena section, making it a slightly longer layout with an extra challenge!

Sections of the Nordschleife

With too many corners to cover them all individually, we decided to summarize a lap around the Nordschleife on a section by section basis, giving you a little history and advice on each!

This first section of the Nordschleife was named after an altar that was dedicated to St. Antony. The altar was situated below a huge beech tree that was taken down before the Second World War to make room for another road. 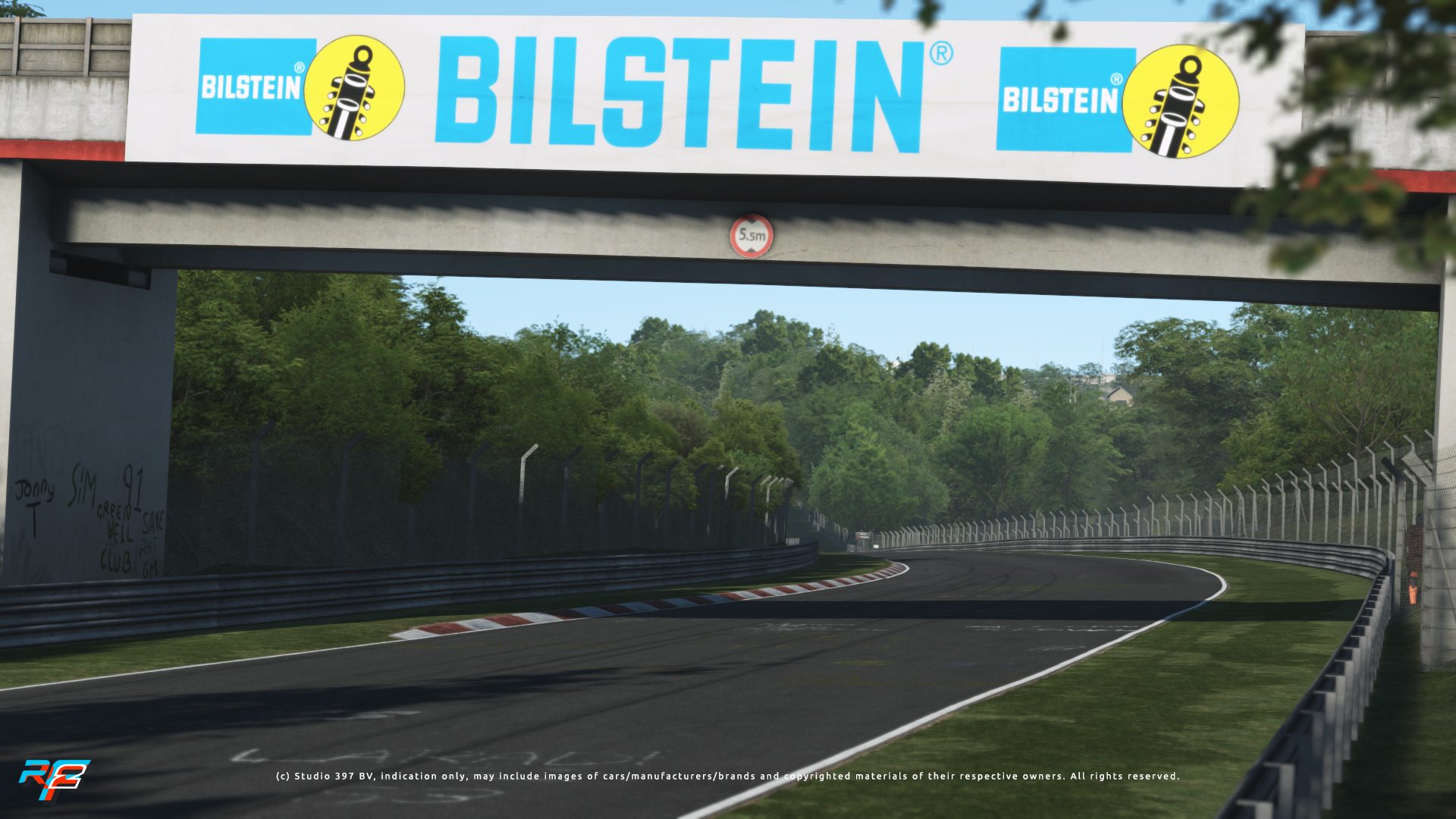 Currently known for the “Hotel am Tiergarten” run by the family Schmitz, whose daughter Sabine won the 24h more than once and is well known for driving the BMW ring taxi for over 10 years, this part was named after a burial ground for animals that died in combat. 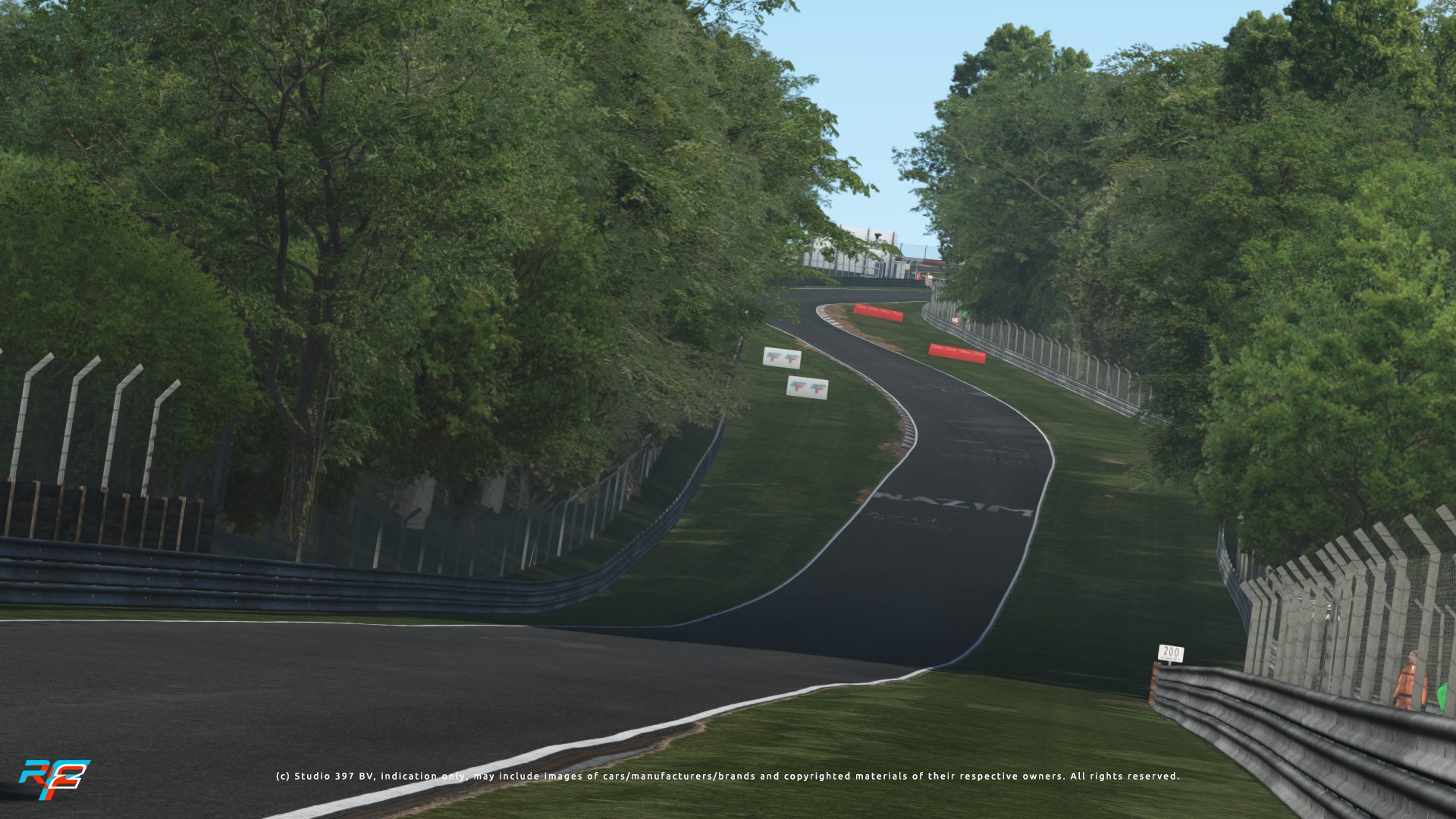 A braking zone surrounded by grass and nowadays parking areas for the track. 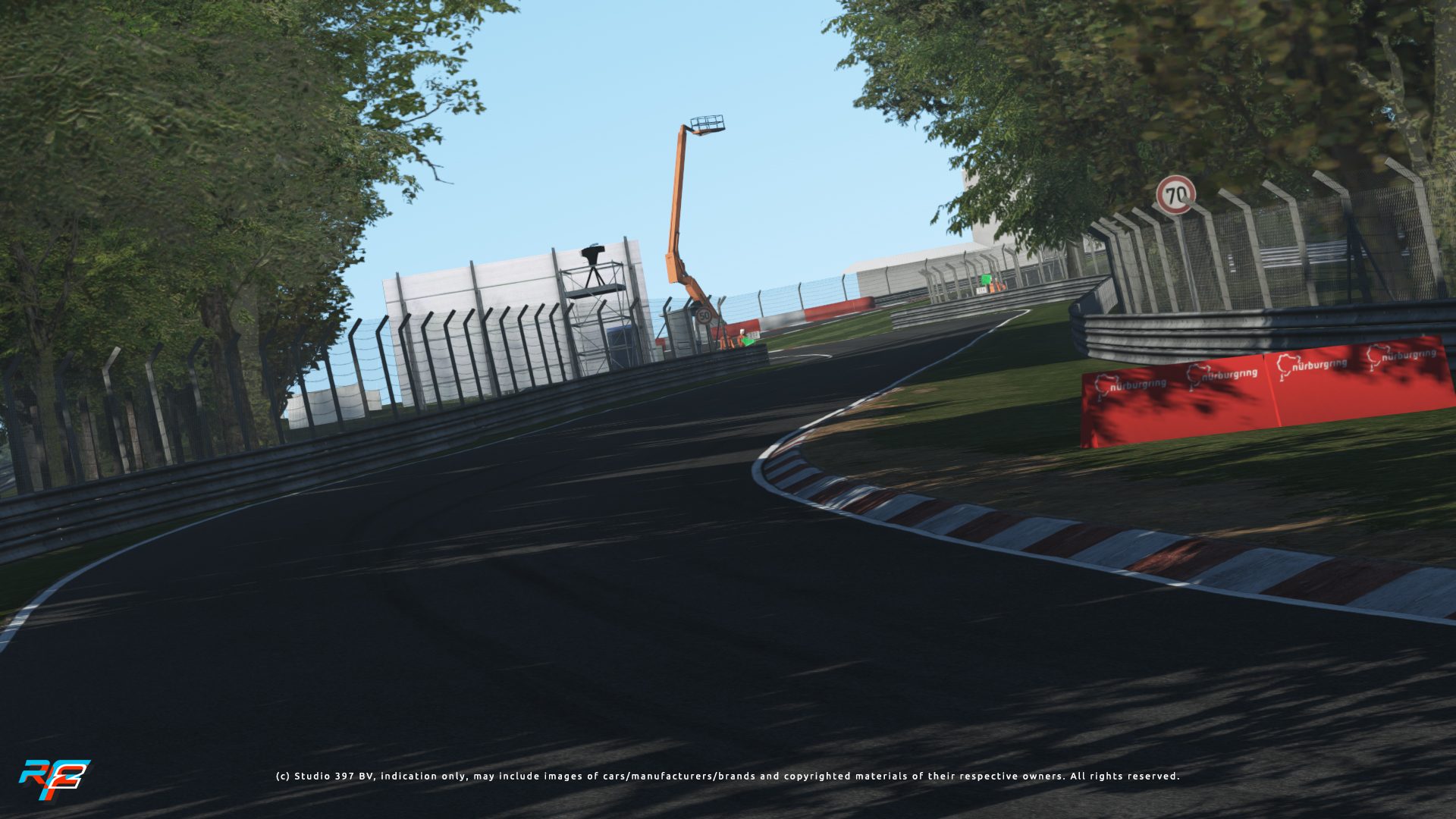 Just to the left of the track, a small creek gave its name to this section of the track. This twisty section is all about rhythm and momentum. 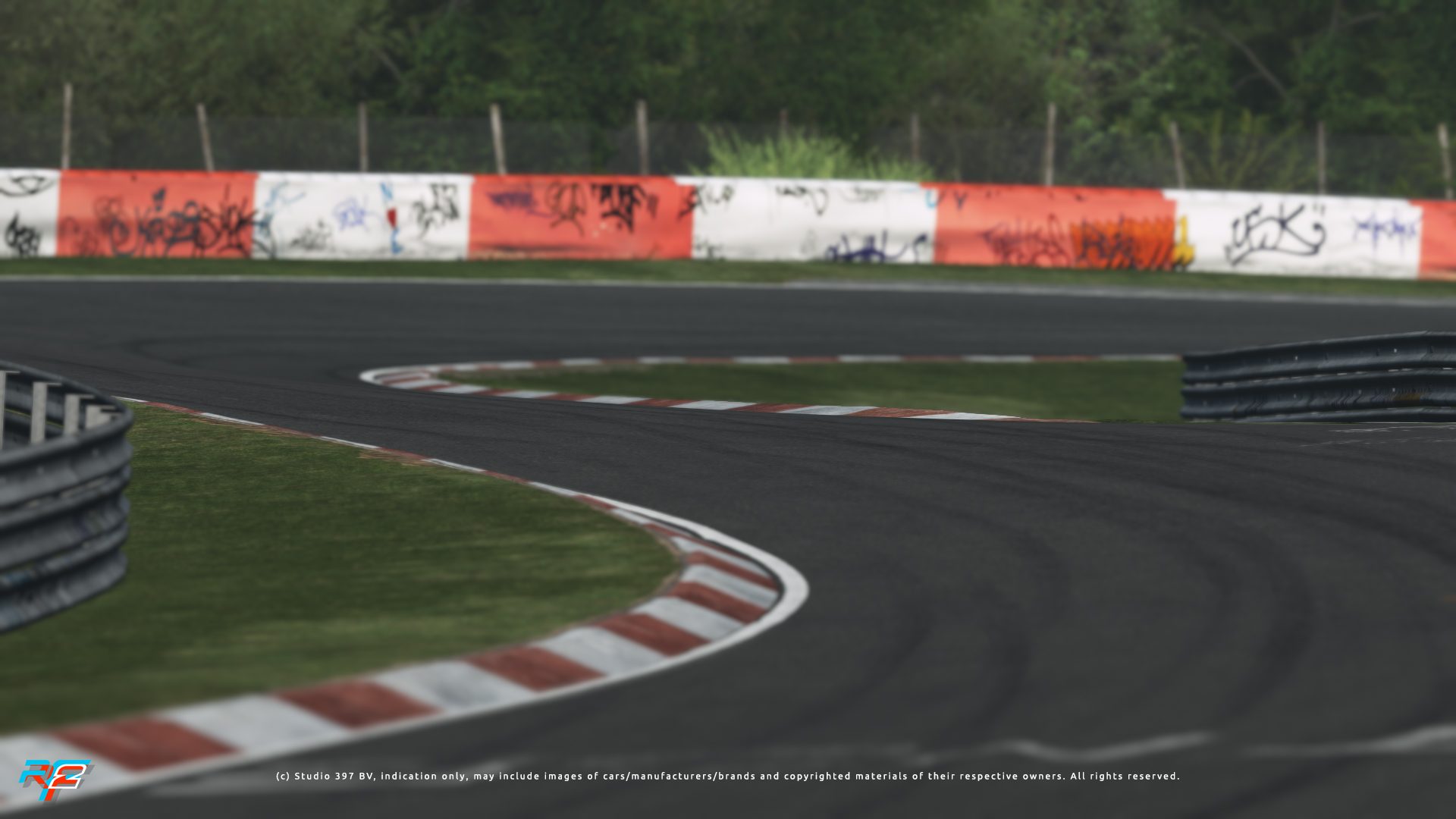 Ironically, the great oaks this section is named after actually had to be largely cut down to make space for the track. 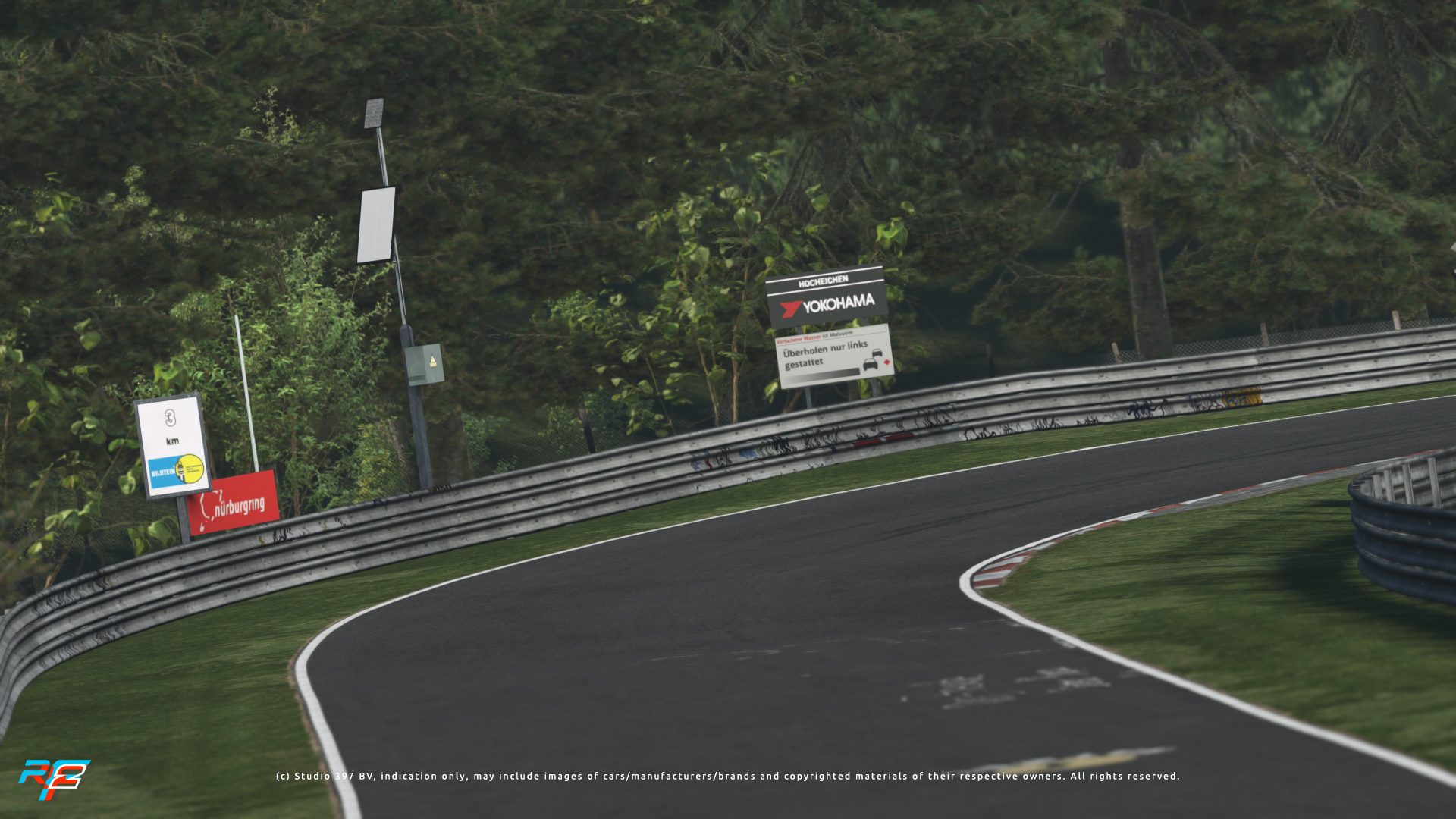 Here the track actually passes along a ridge on the highest part of the village of Quiddelbach. This and the following sections are all about nerve and keeping your foot down if you dare! 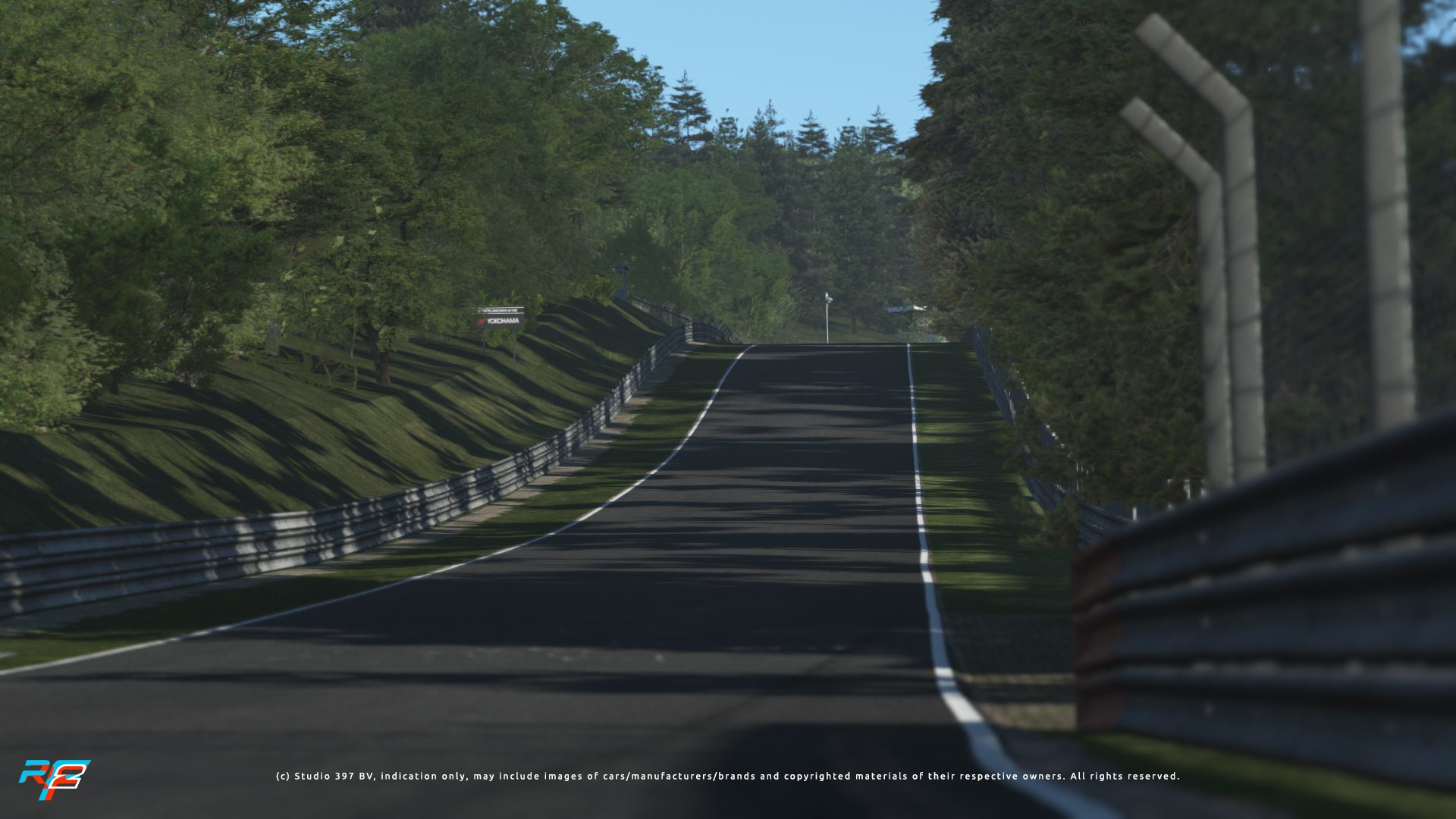 Although many driving the track will remember this section as a place where you actually get all four wheels off the ground, giving you the feeling of flying, the area left of the track was a former airfield for gliders. 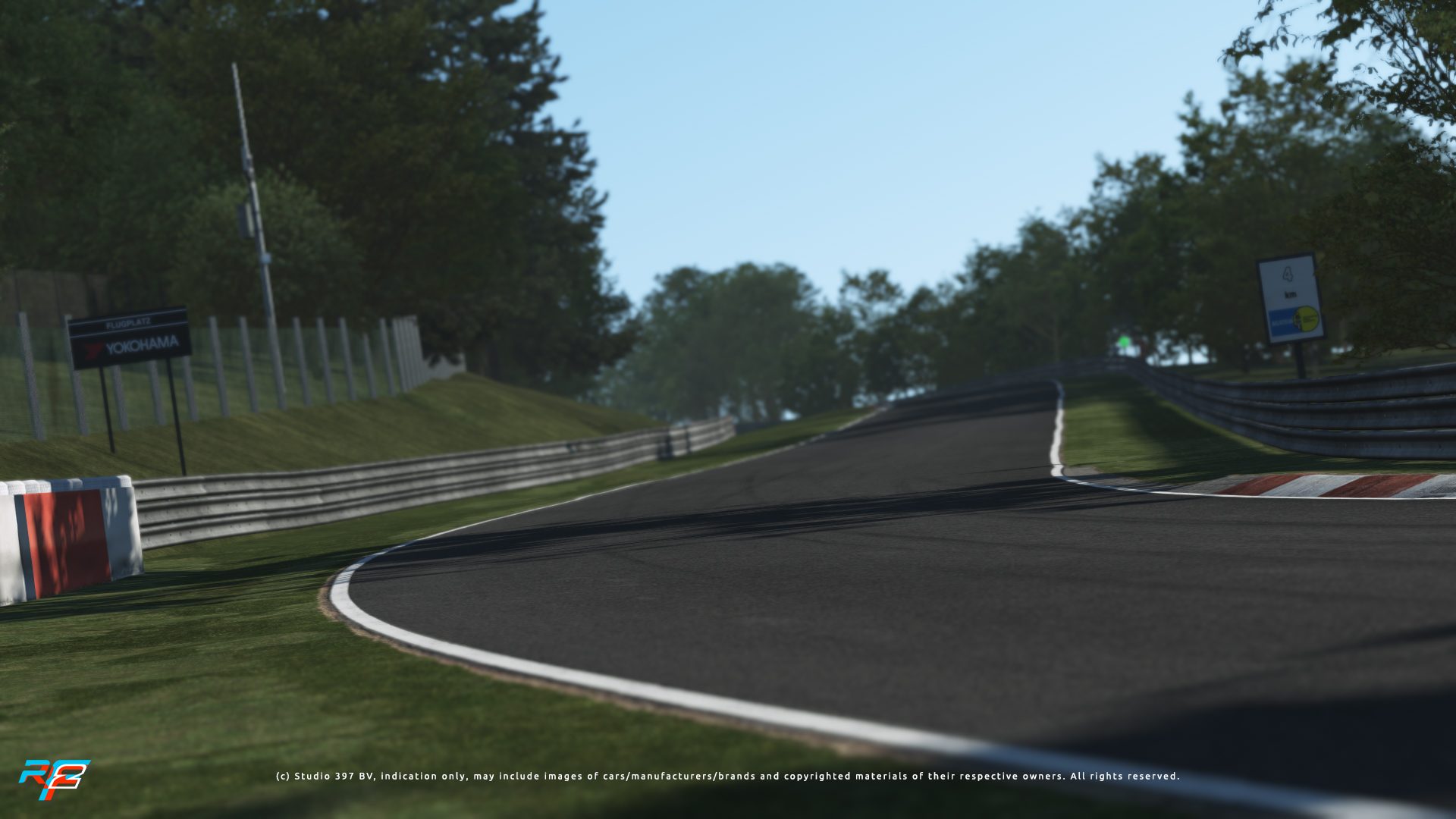 A stone cross, erected there in 1638 as a memorial to the mayor of Kelberg and tax-collector for Adenau after he was believed to be killed by deserters from the Swedish army. Iron clamps nowadays hold together the remains of the cross, which broke roughly a century ago. 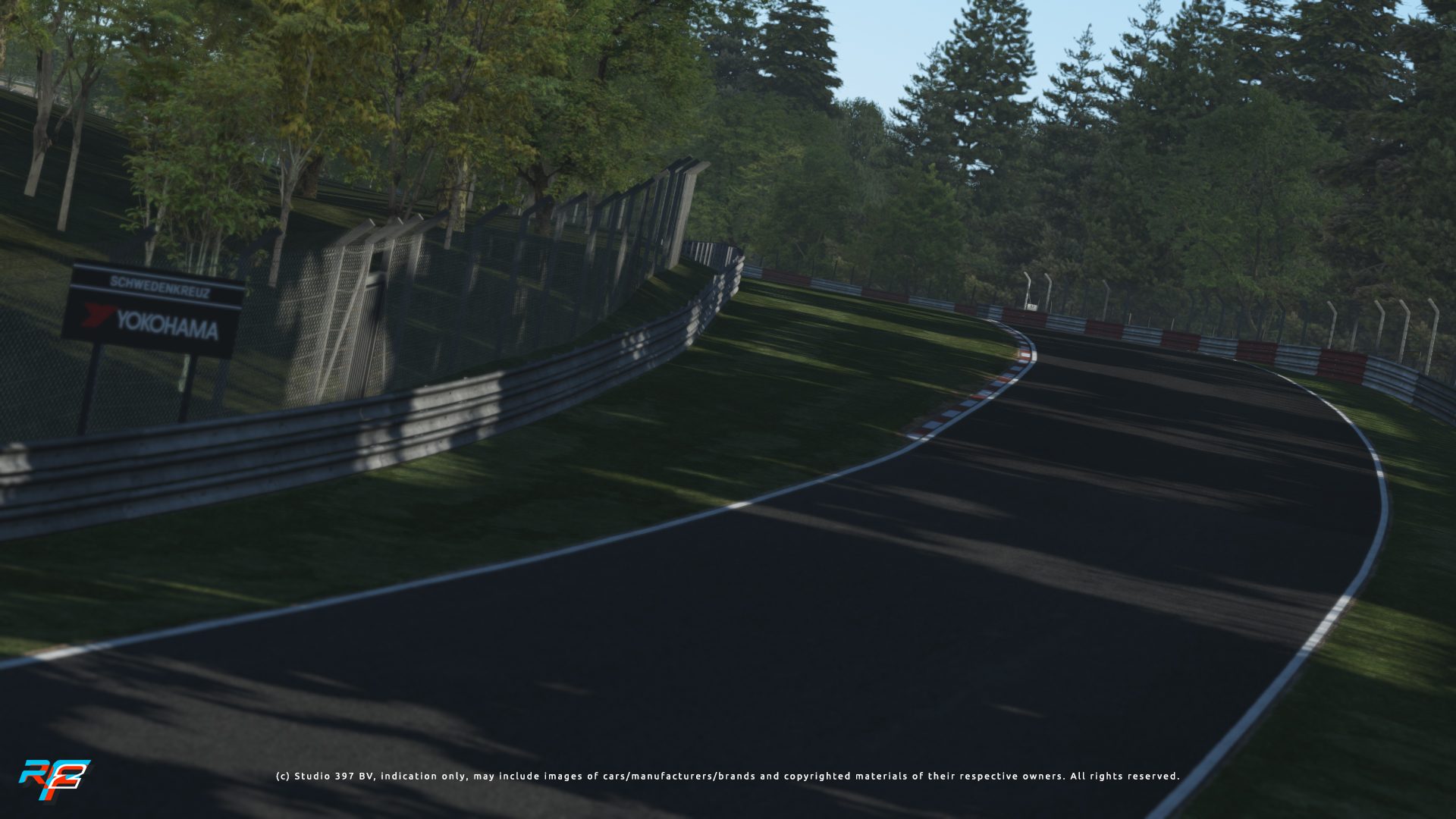 A volcanic hill and nearby village share the name with this section of the track. As soon as you exit this section you plunge downhill at high speed, only to emerge again at the top, which is one of the slowest parts of the track. 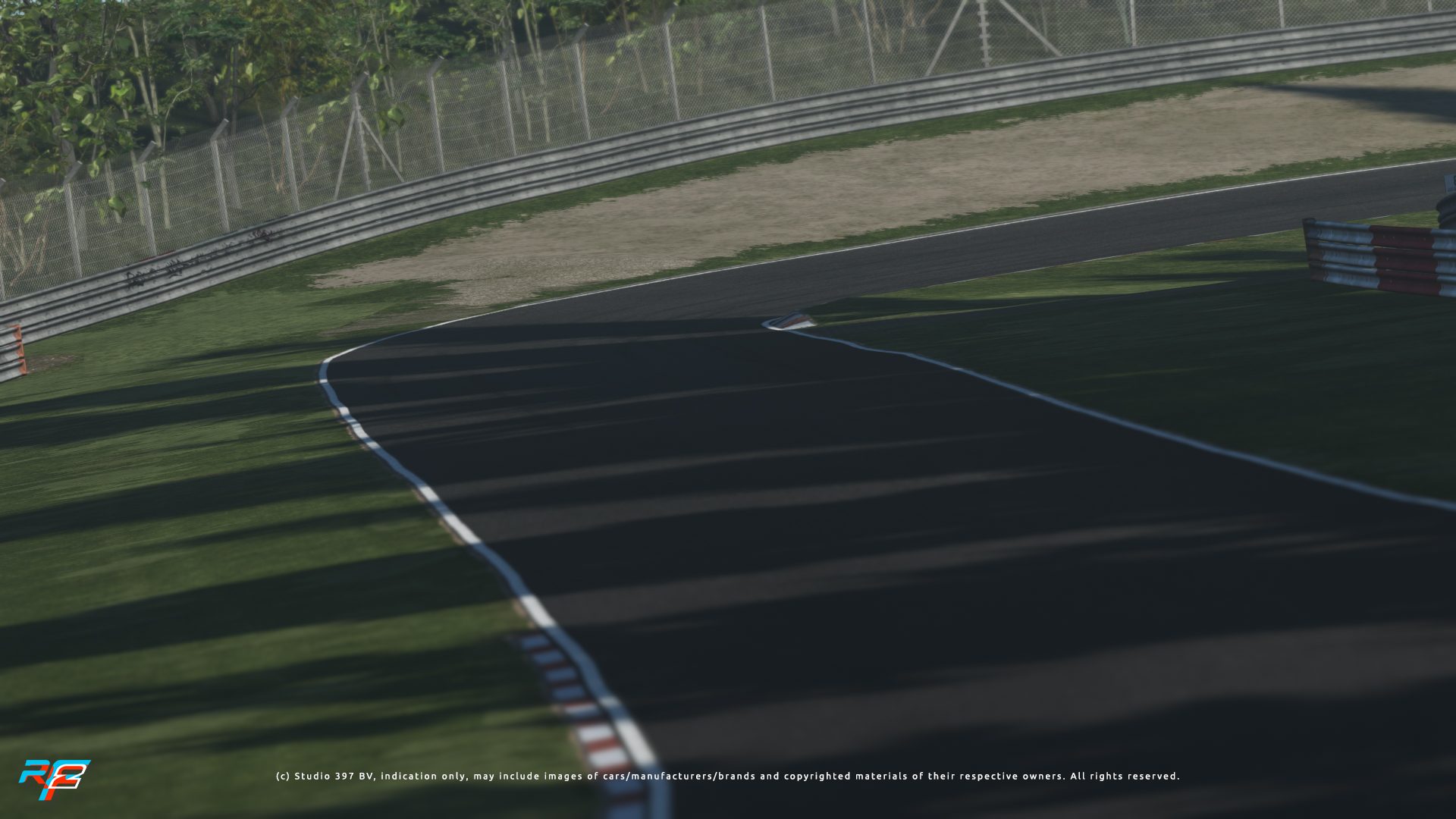 Spontaneously named by construction workers after a frightened fox that dived into a drain pipe during the construction of this section of the track. The incident actually temporarily halted work. This part of the forest, near the town of Adenau, gave name to the track passing through. 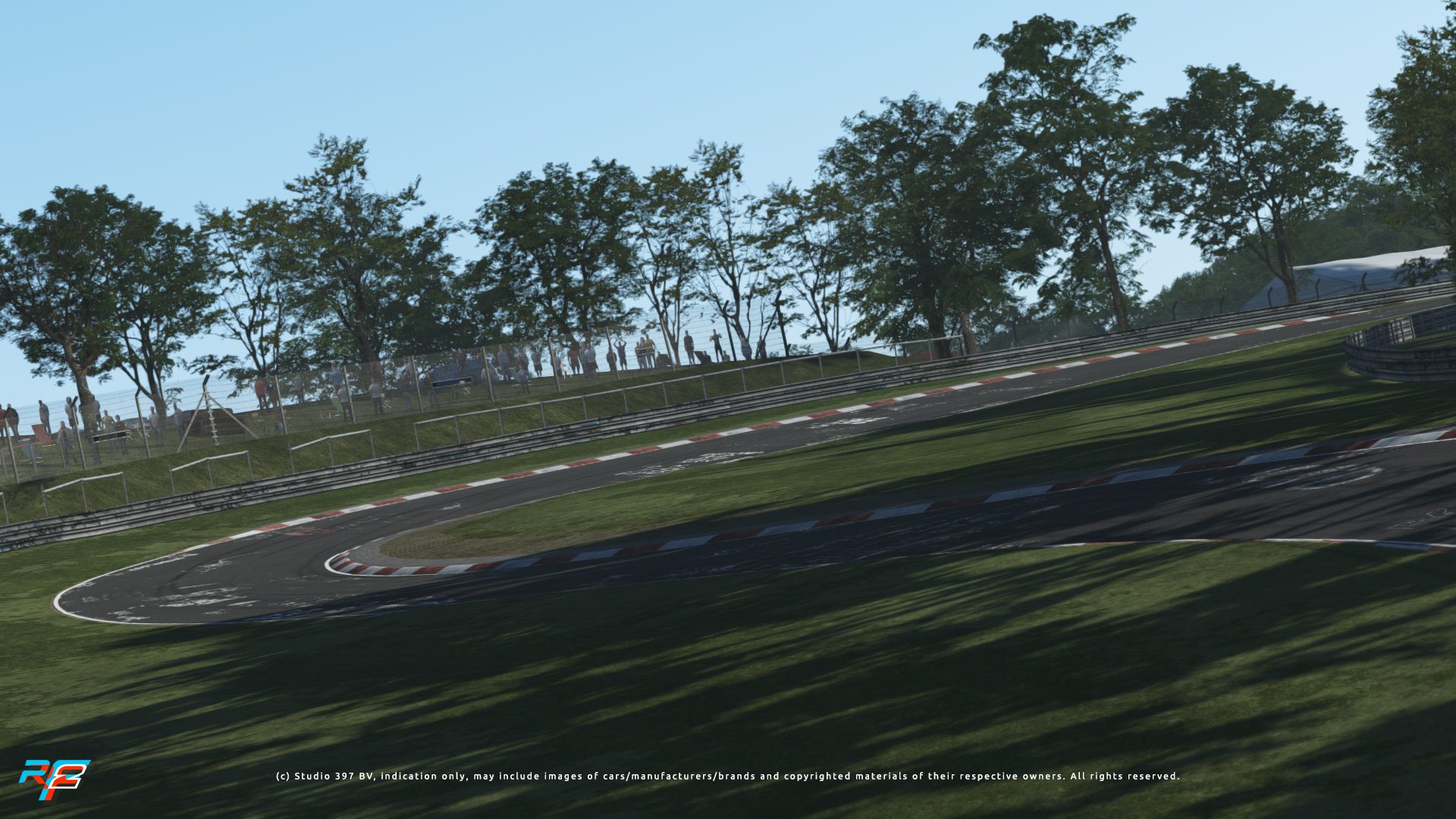 An ancient map from 1860 marks this area as a field that was owned by someone called Metzges. It’s actually a quite complicated section of the track to drive. Be aware of where the jumps are and don’t let the curbs fool you. 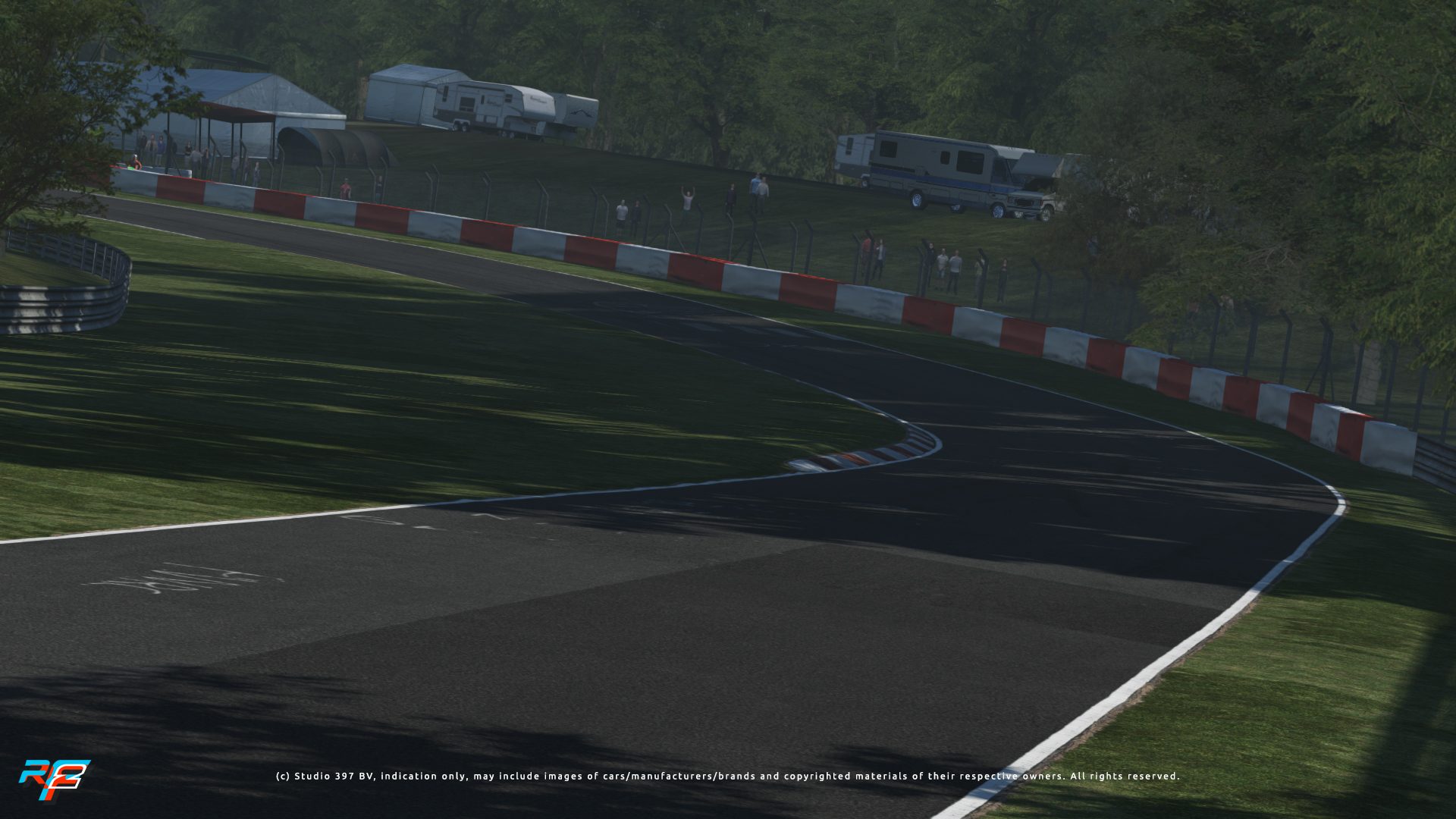 The old German term “hard” means mountain forest, so essentially this is just another part of the track that is named after a forest. 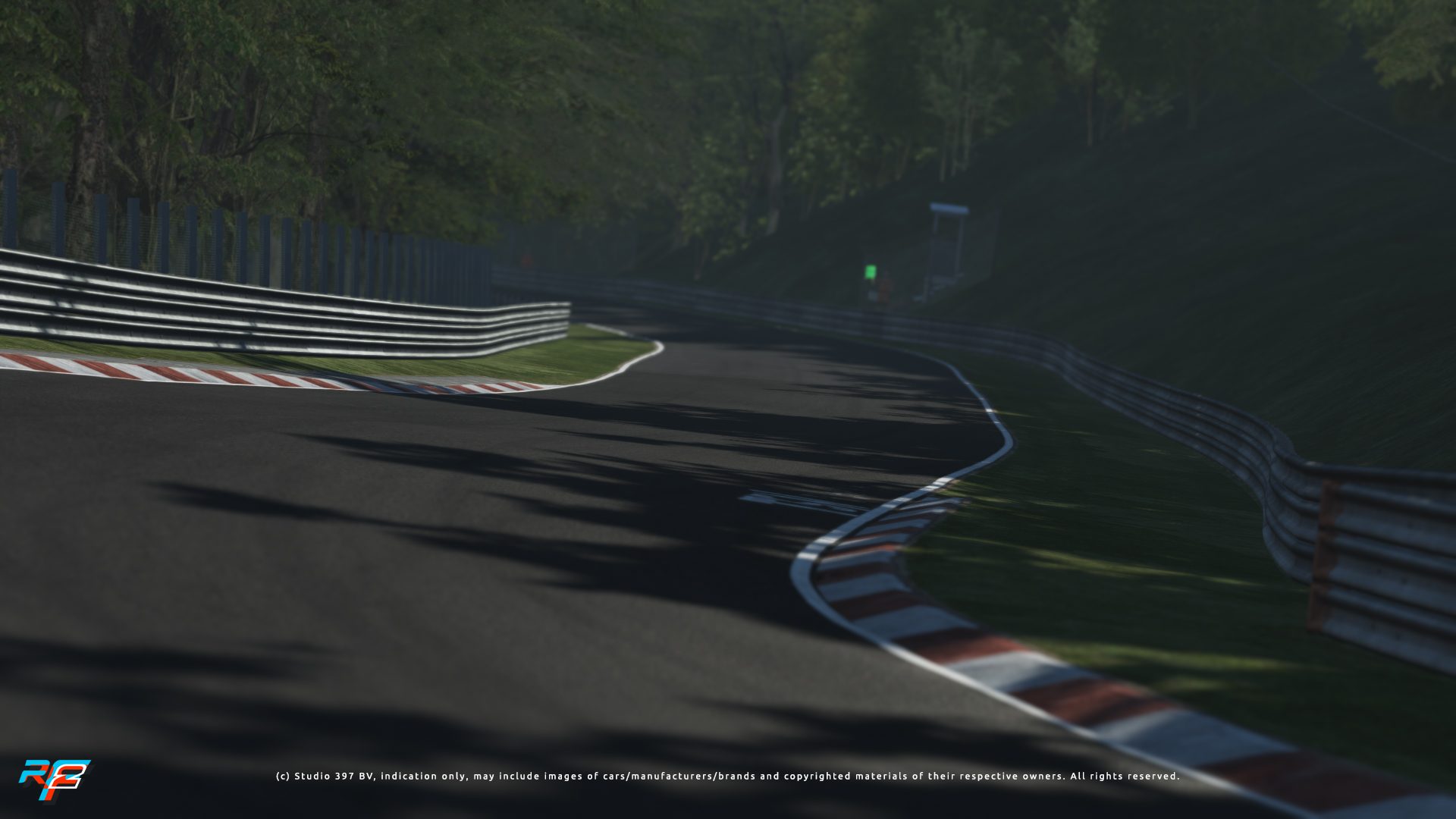 From an old German we go to a Celtic word, “seifen” meaning valley. This valley marked the border between the towns of Breidscheid and Adenau, which have since formed one single town. It is also the slowest corner on the track. 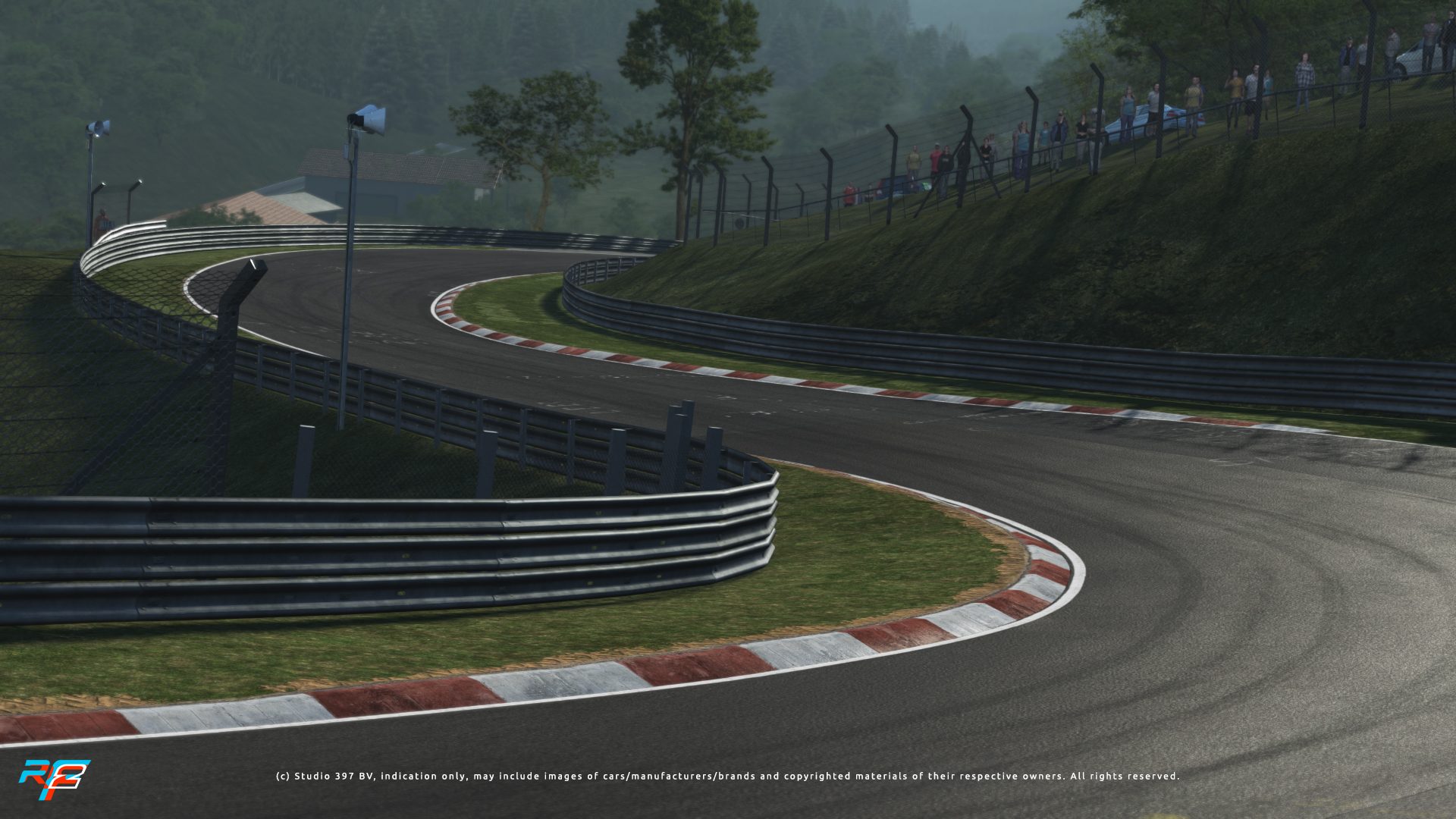 After the original owner of the water mill refused to sell the necessary land to build a paddock here, this section was promptly named after the mill. Obviously that refusal also meant the start/finish line could not be situated here. Driving wise it’s downhill and back up again, where the start of the climb is the biggest challenge, taking as much speed up the hill as you can. 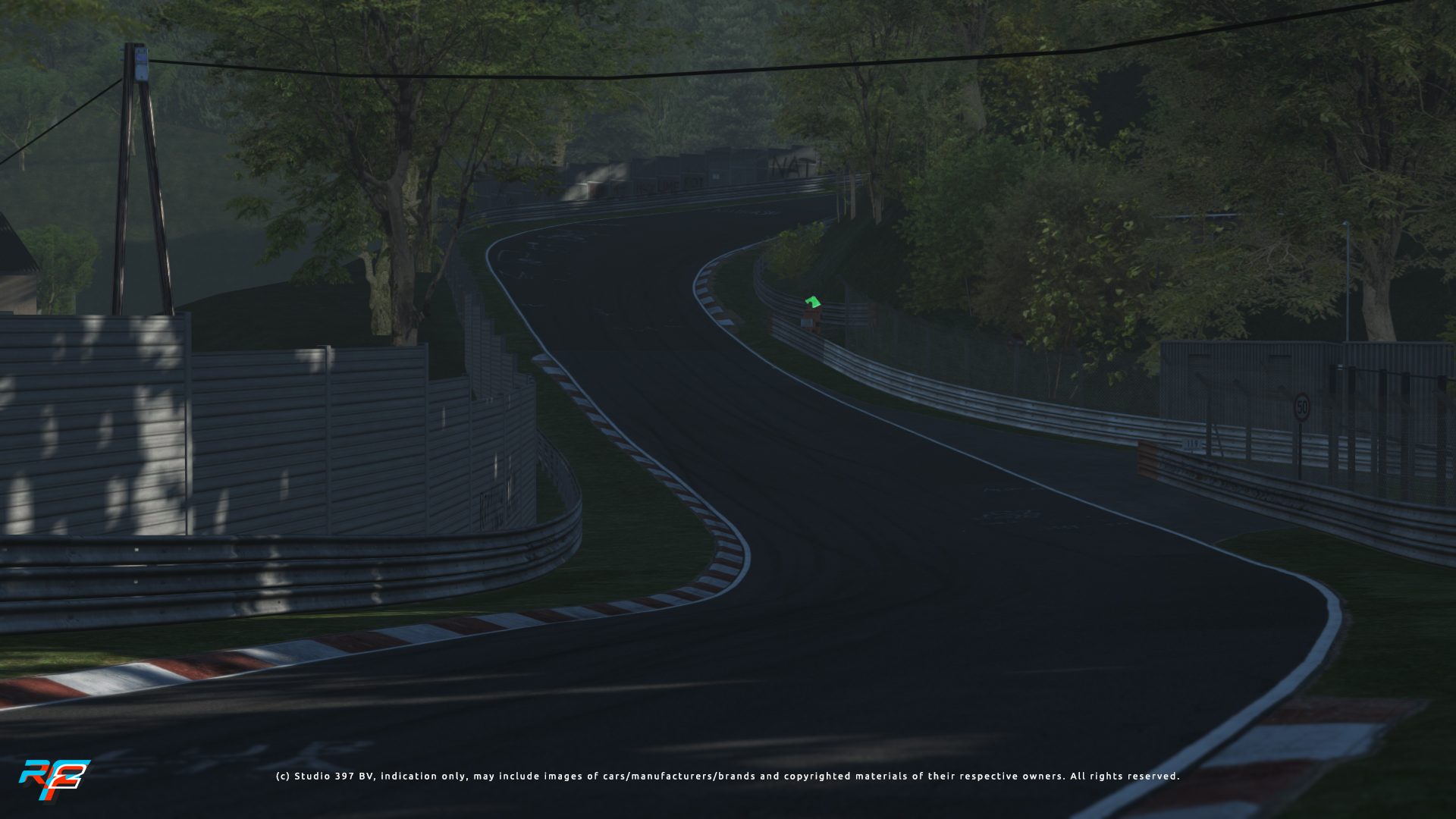 Until roughly 1900, this was the location of a mine, where lead and silver were mined. The mine closed after those natural resources were exhausted. Leading onto the back straight, this is an important corner to get right. It’s probably also one of the most dangerous ones. 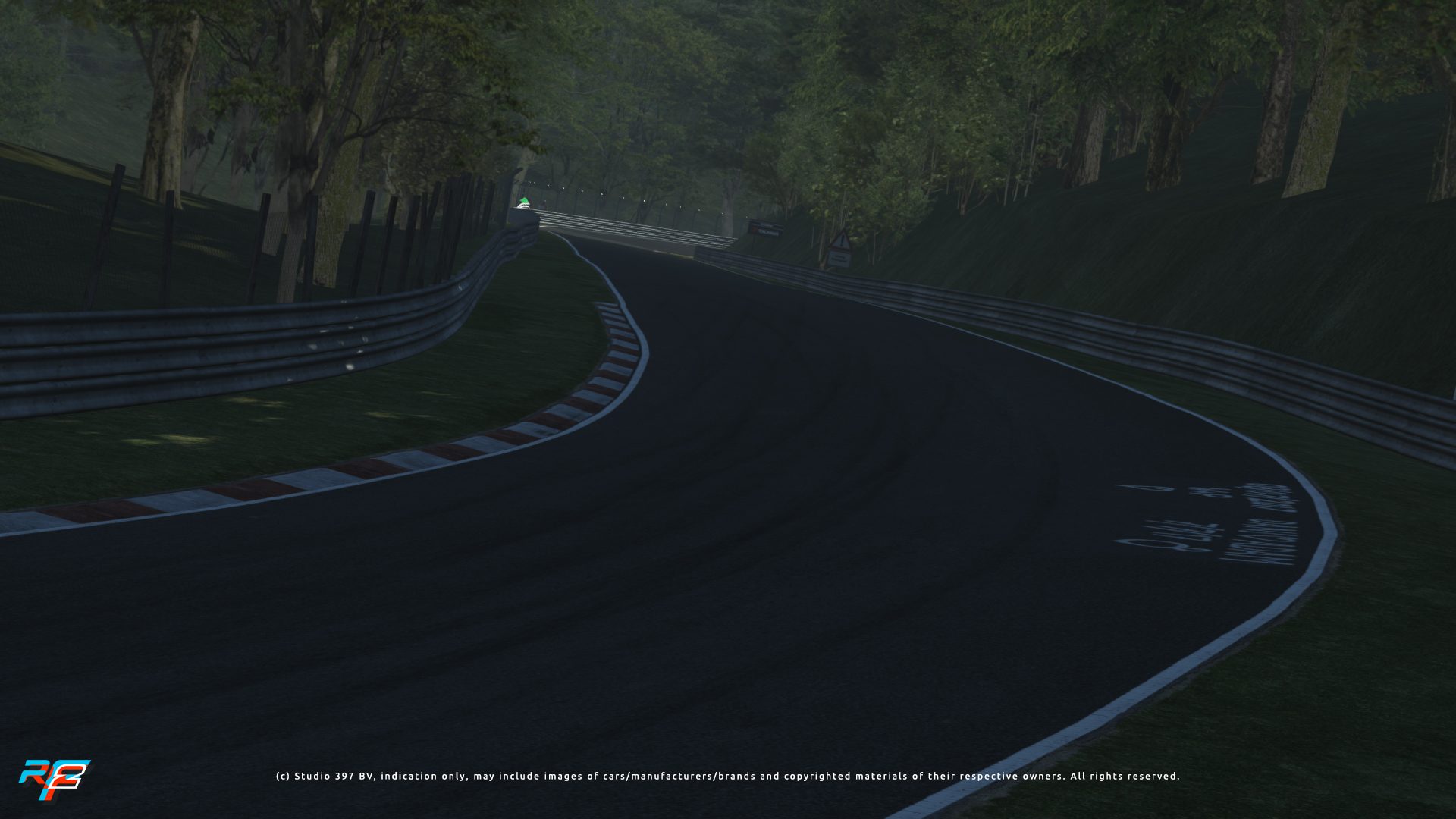 Named during construction after the little valley this section is in. 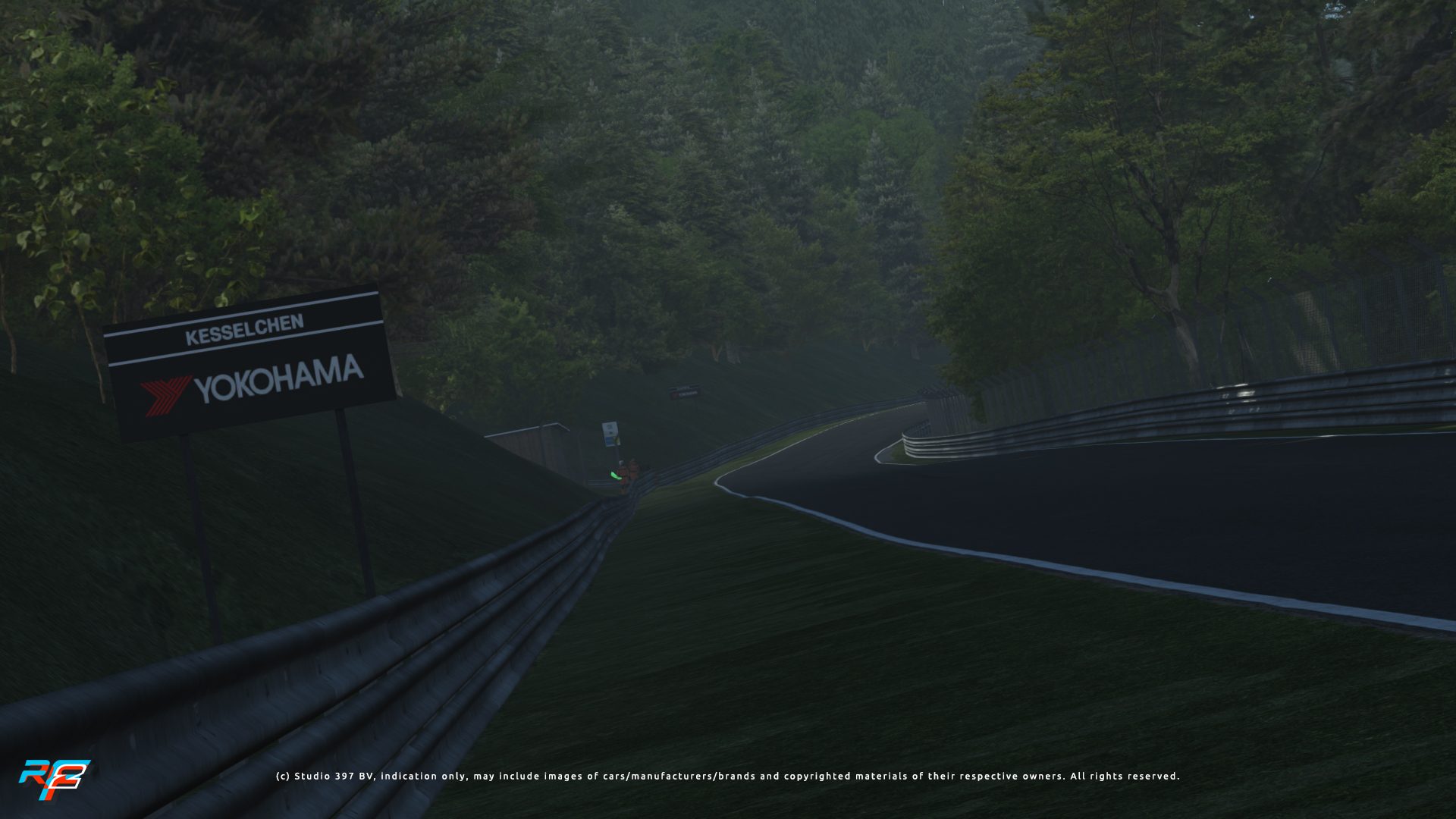 In the 14th century, this part of the valley housed a convent (or “Kloster” as this is called in German) where an Order of the Knights of St. John of Jerusalem lived. Later, in the 18th century, a monk lived there who helped people in need. 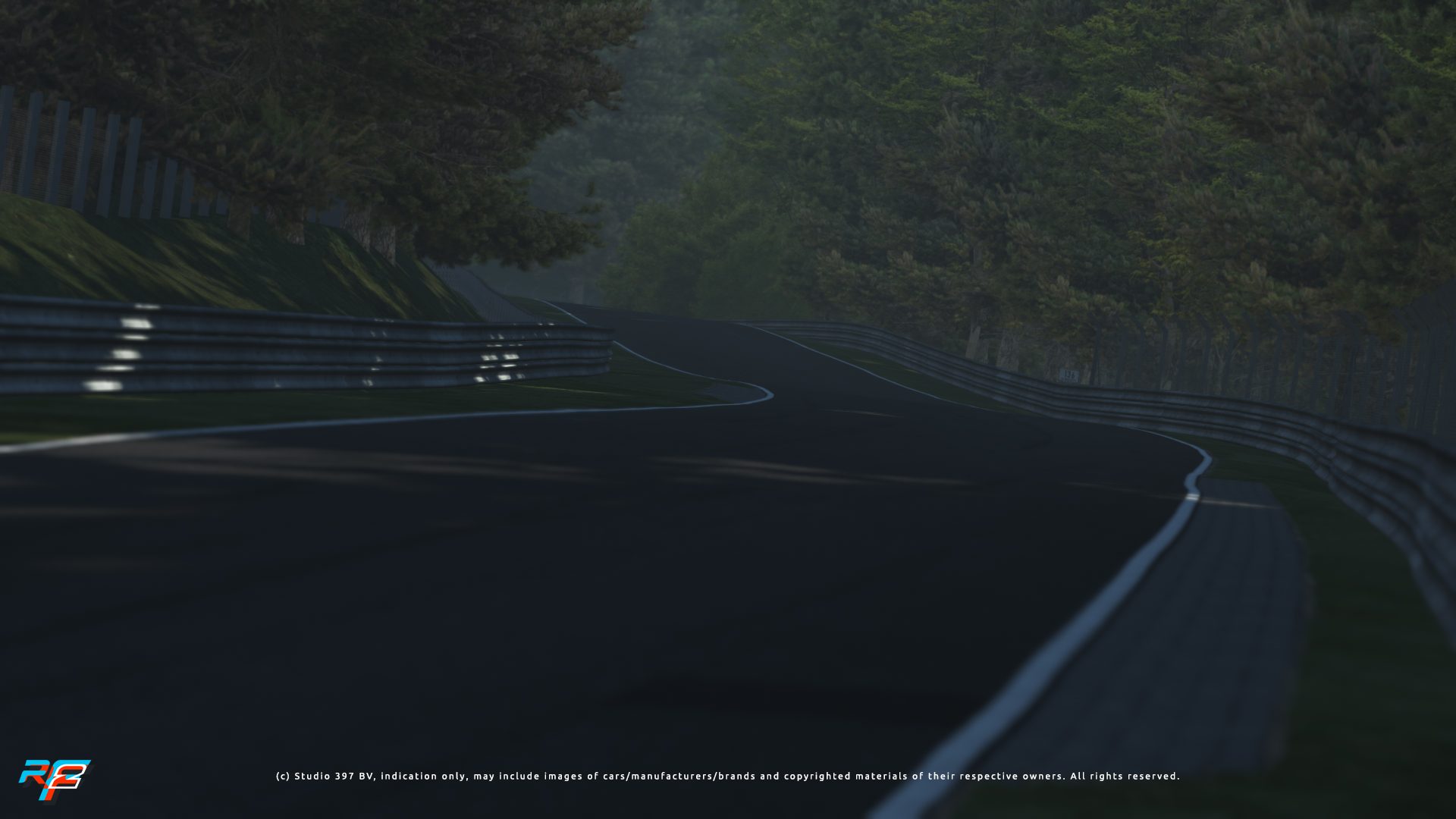 Not in use today, but a former testing section, and still open for the public. Keeping your momentum here is crucial, with no room for error! 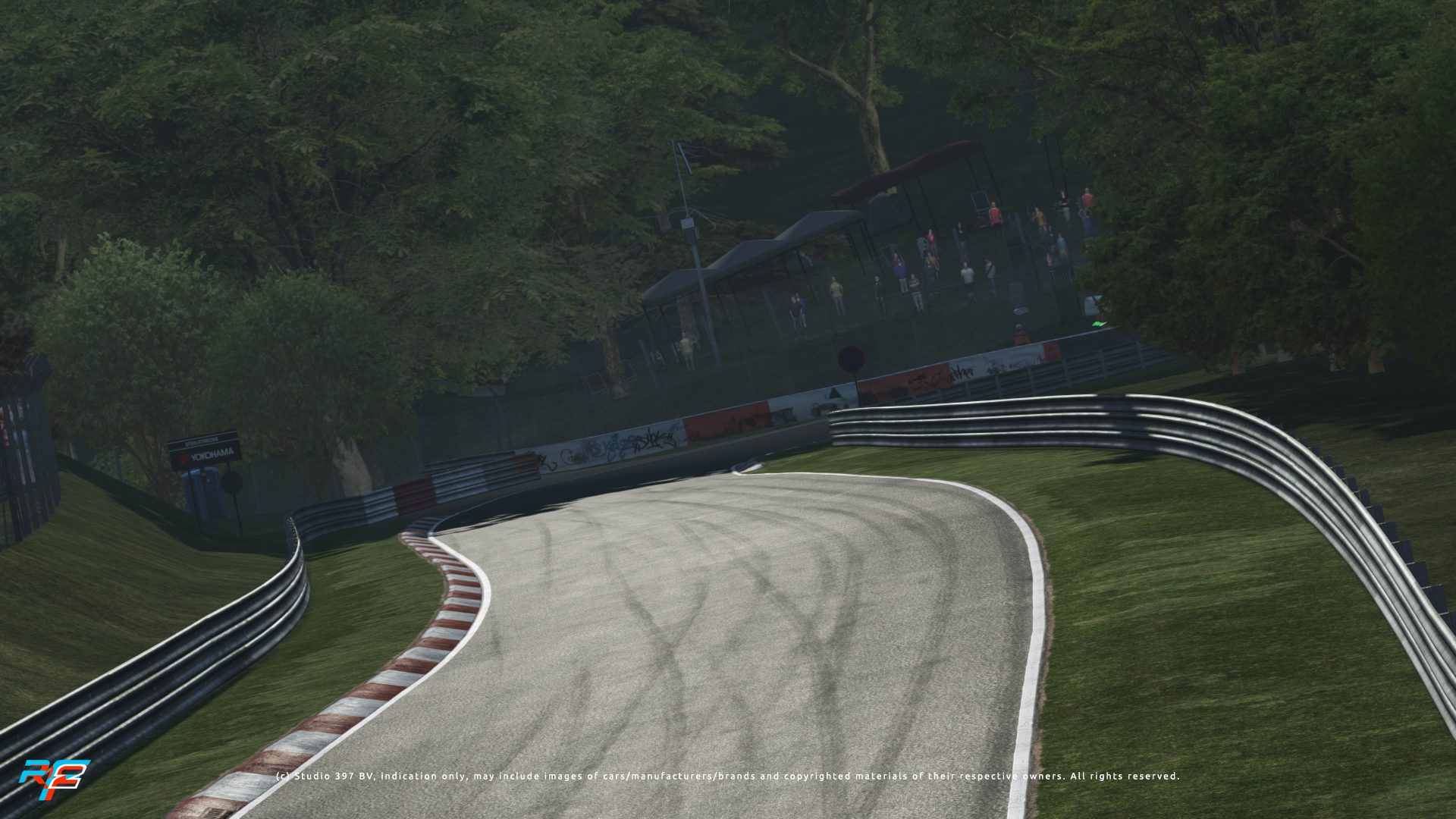 Probably the most iconic turn of the whole track is the carousel. The original bend went around the top of the turn, with the banked section being there for drainage only, but one day a driver called Caracciola had the idea to actually drive this section and the rest is history. Entry and exit of the hairpin are probably the most important to get right. 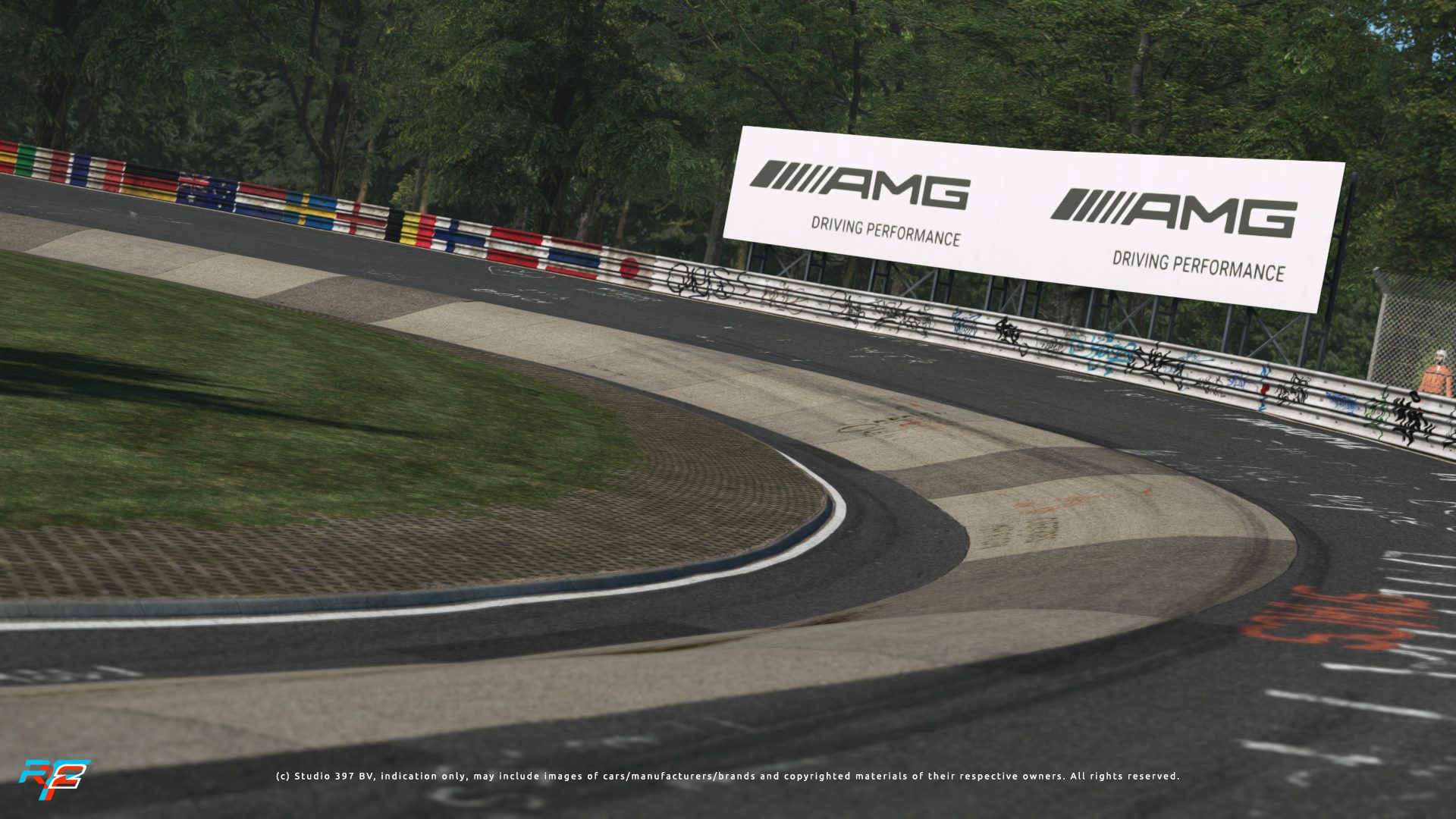 Named after a hill that is the highest point in the region which can be found close to the race track. 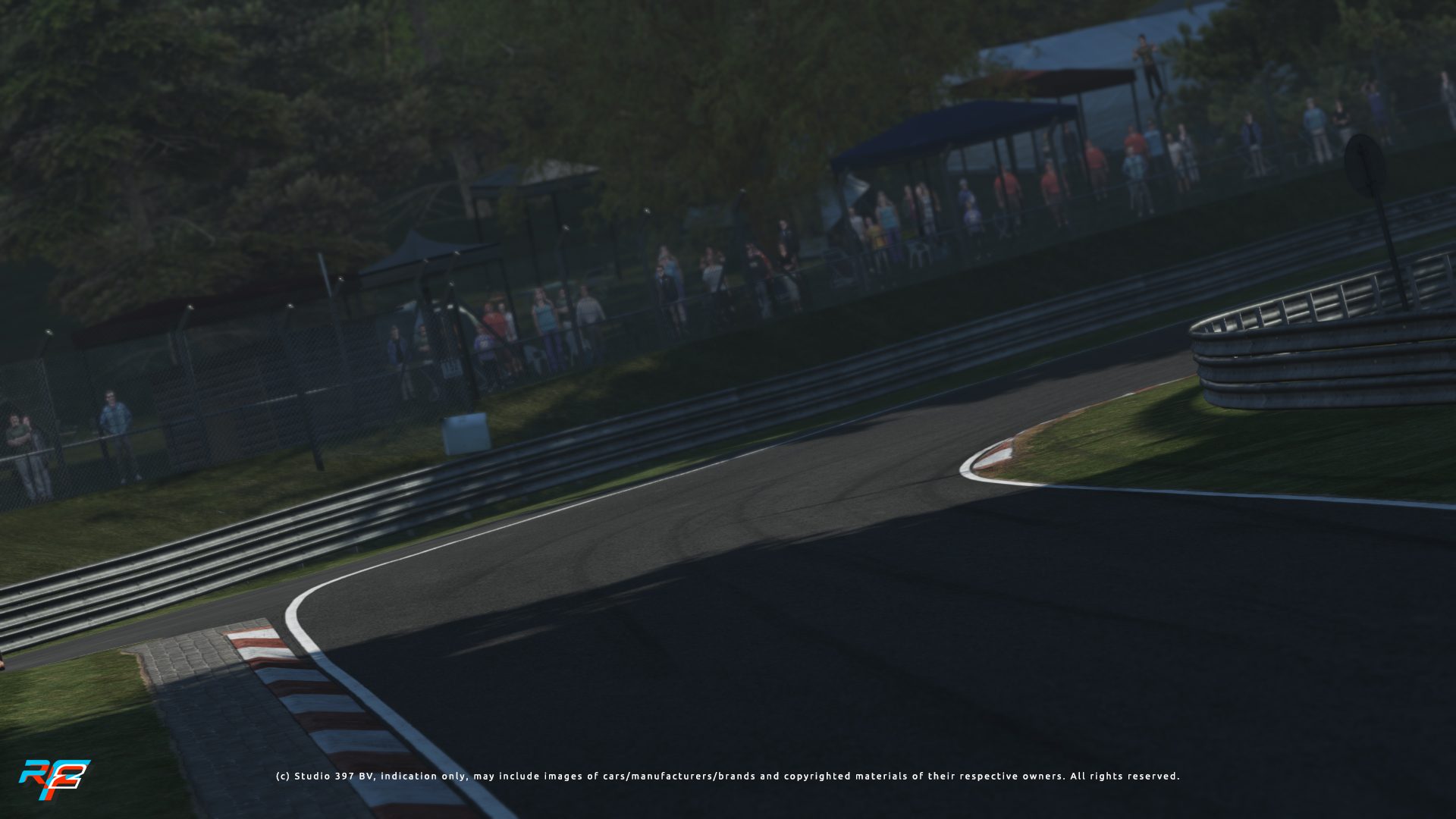 This section was named after the wife of the spiritual godfather of the Ring. While her husband was overseeing the construction of the track, Hedwig enjoyed the panoramas from this point on the track. 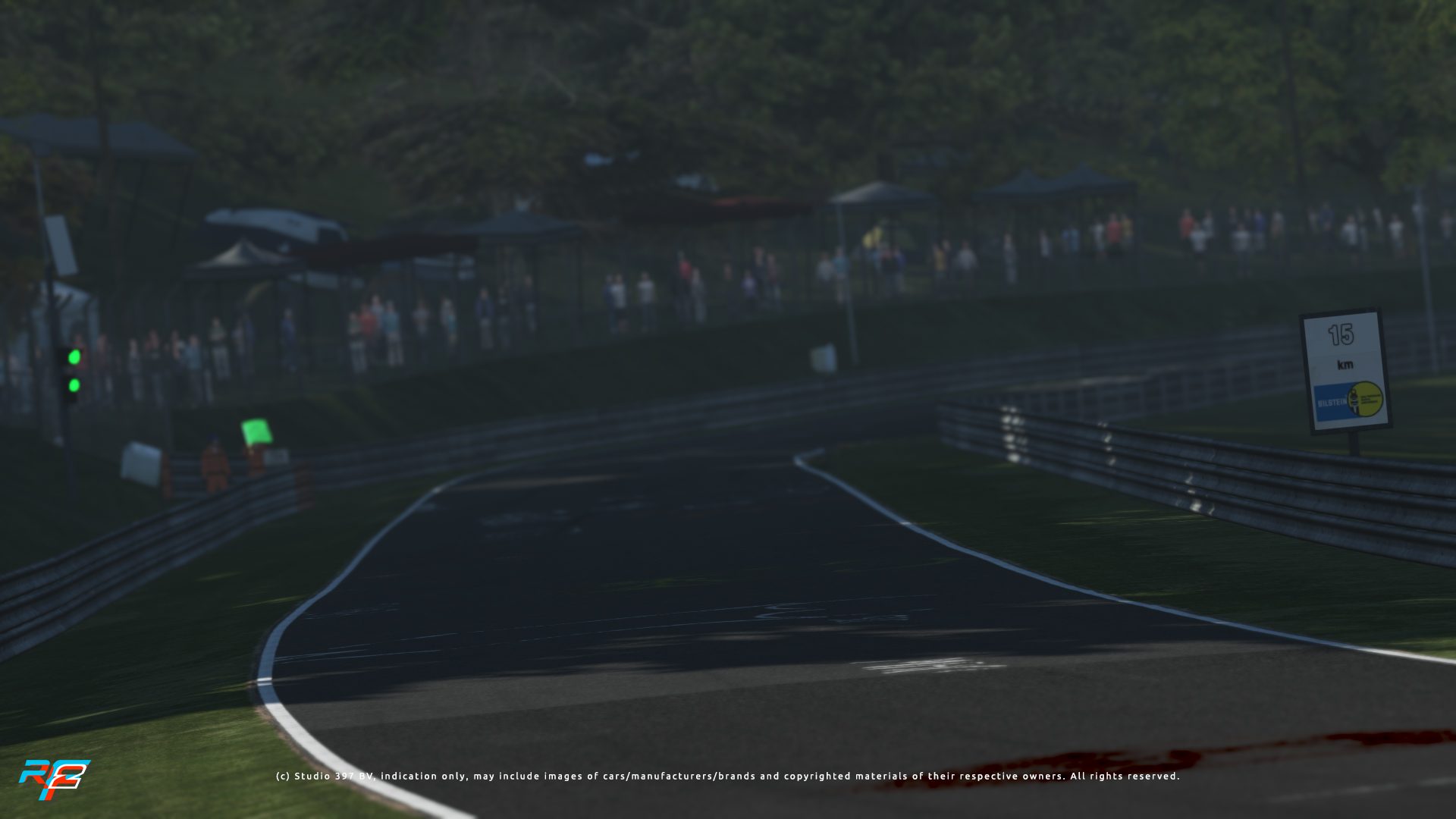 In the early days of the track, cars used to go up and down in this section of the track, that has since been made less dangerous, like the earlier Flugplatz. That does not mean it’s an easy section today. Try not to upset the car too much here! 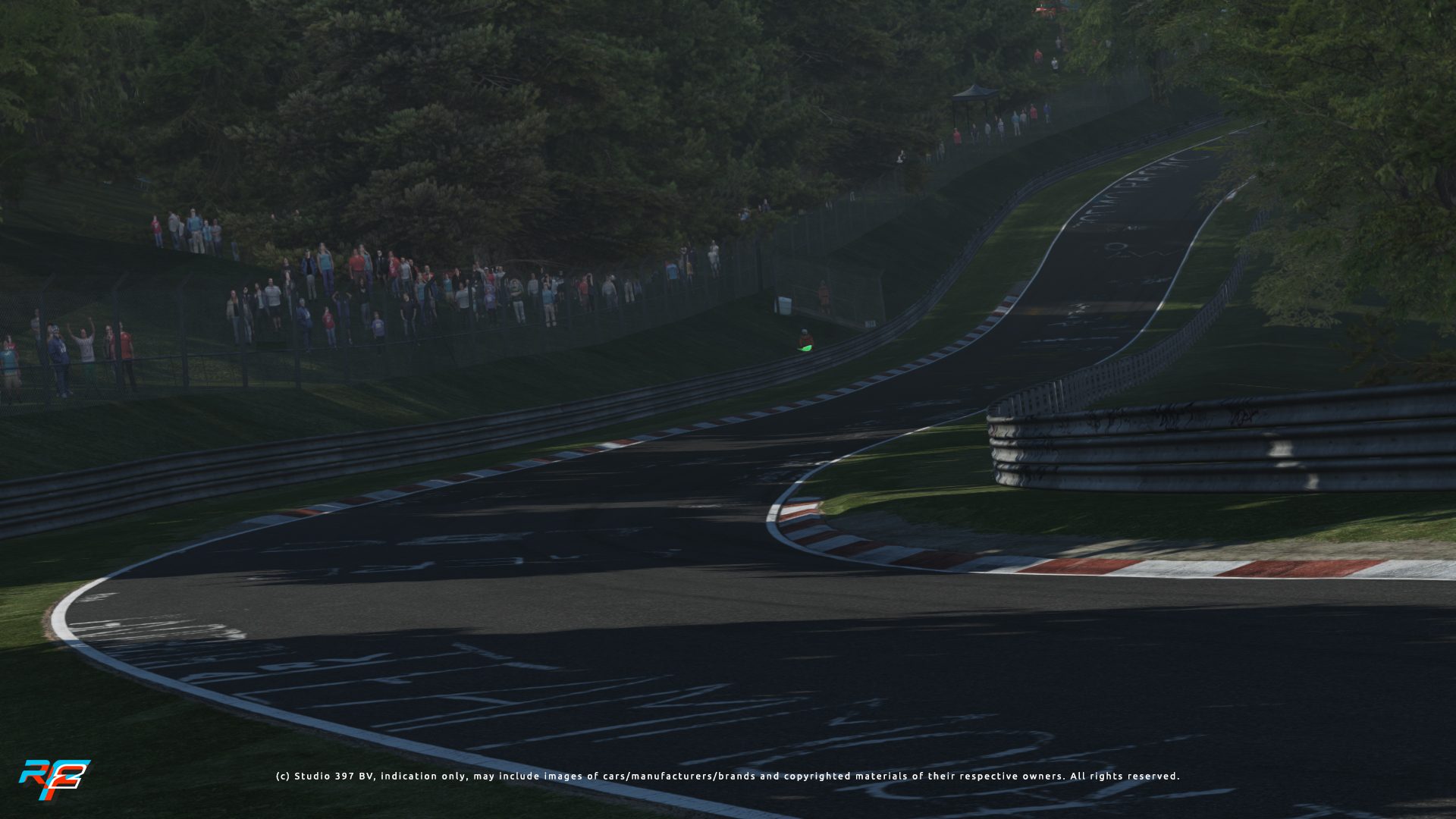 This is another twisty section of the track that got its name from both a creek and a small village of the same name. The name itself also refers to a lot of ash trees that used to stand here. The literal translation being “little well”, this was the location of several irrigation lines to Herschbroich and also the location of a bridge over a creek that is part of the track. This is a popular location for spectators too, because there are always a lot of things happening. Don’t be the next person to grab their attention there! 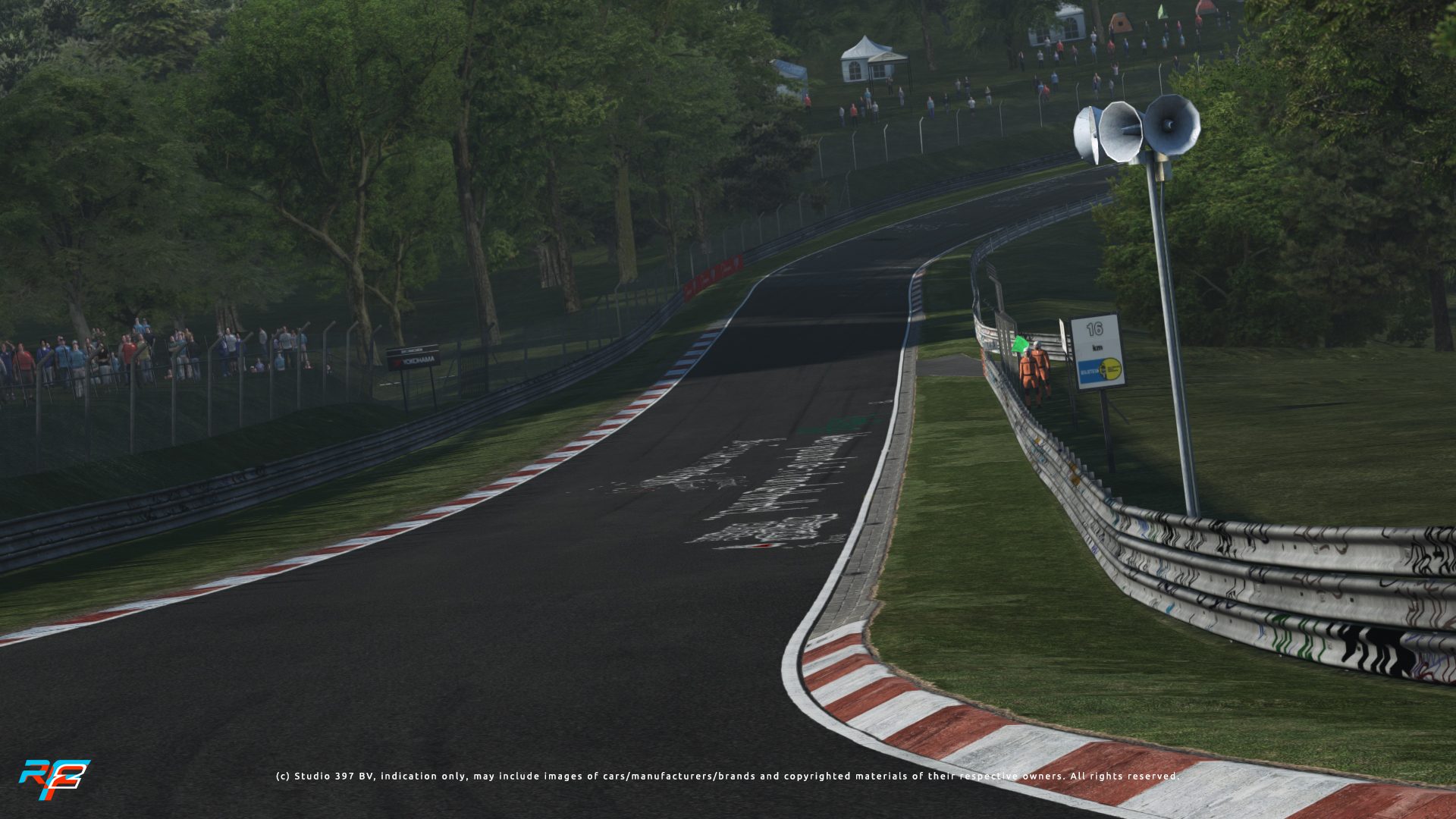 Often also referred to as Pflanzgarten 1 and 2, this area used to be the site of gardens and fields for growing plants of the counts of Nürburg. 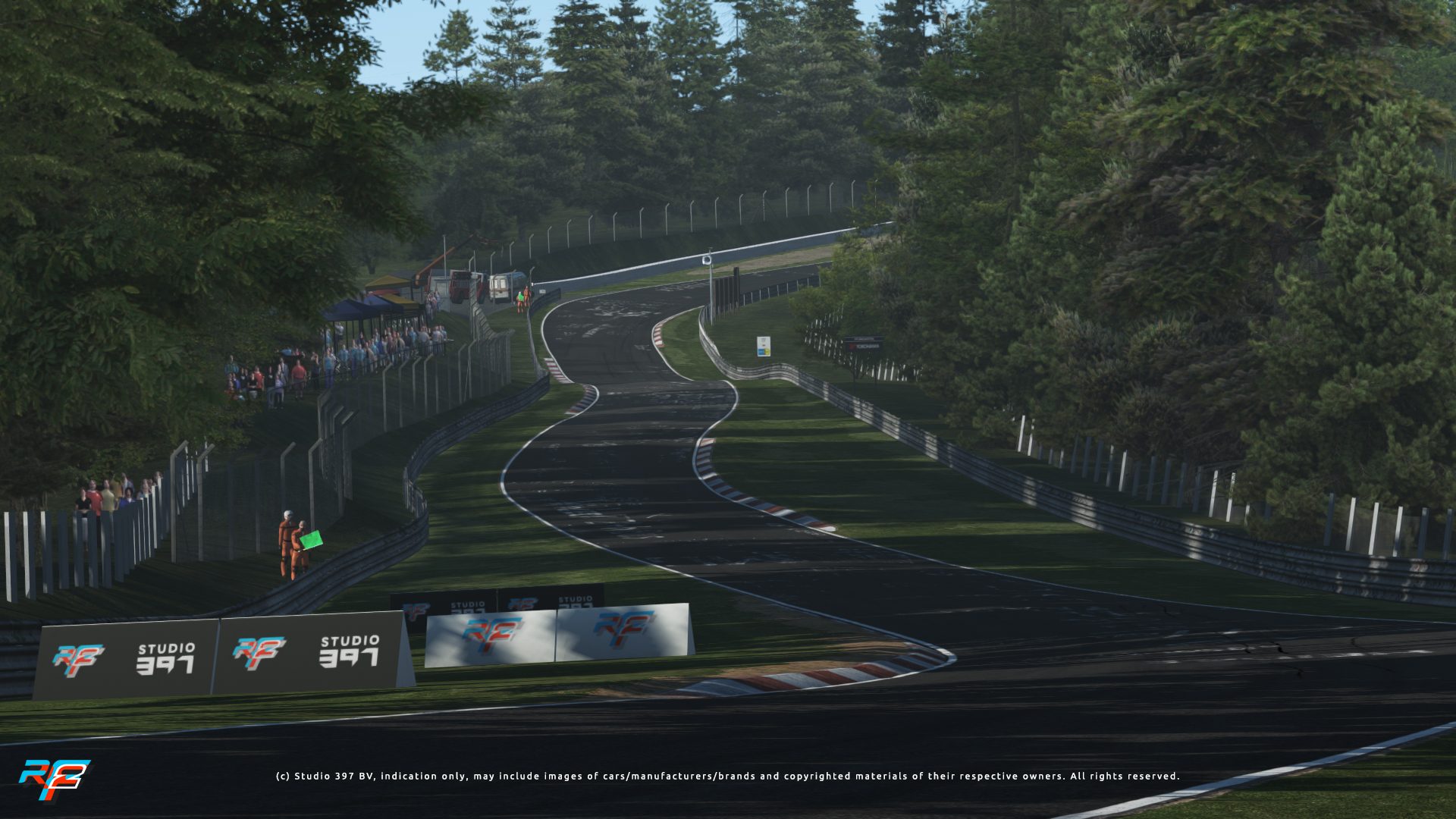 An S turn that was named after the race driver who set a new lap record in 1983 during a 1000 kilometer race. 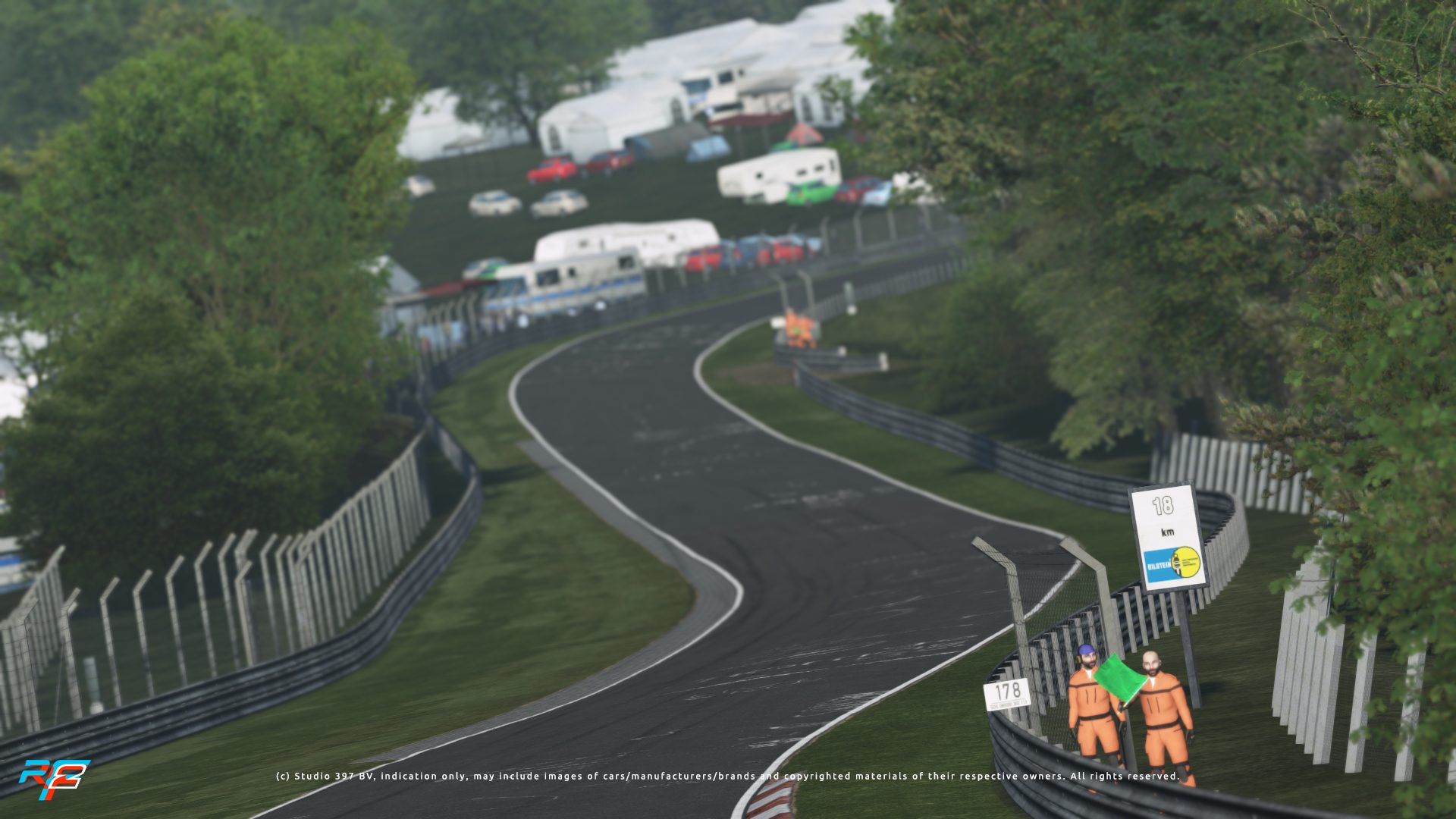 With a bit of imagination, if you look at this section of the track, it looks like the tail of a swallow, so it was named like that. At the end of this section lies the small “Karussell”, a baby version of the most iconic turn on the track. Keep your speed up and have a good flow to finally exit onto the long straight with maximum momentum! 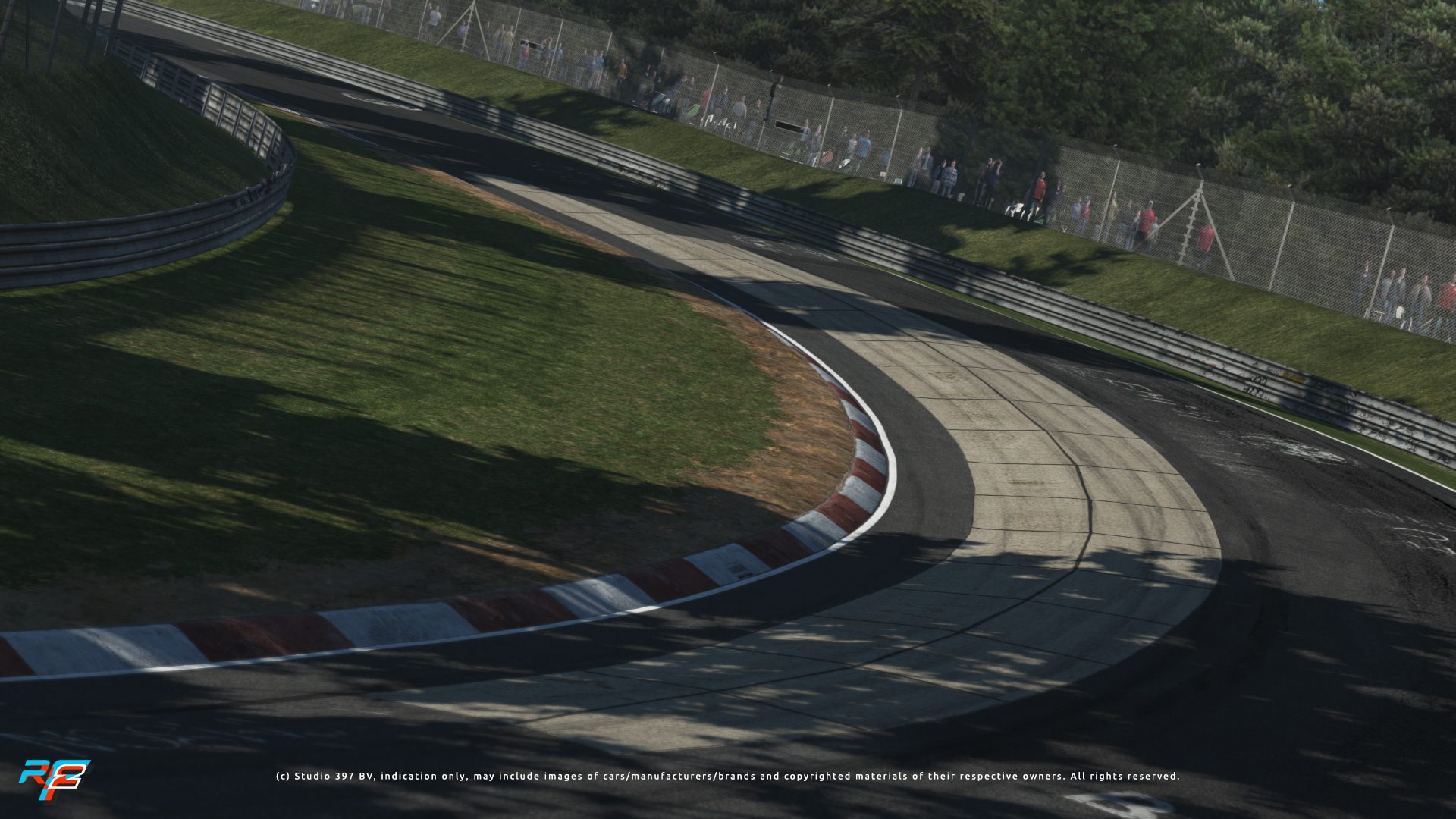 It’s been a while since public executions were in fashion, but when they were, this is where the people of Nürburg held them. 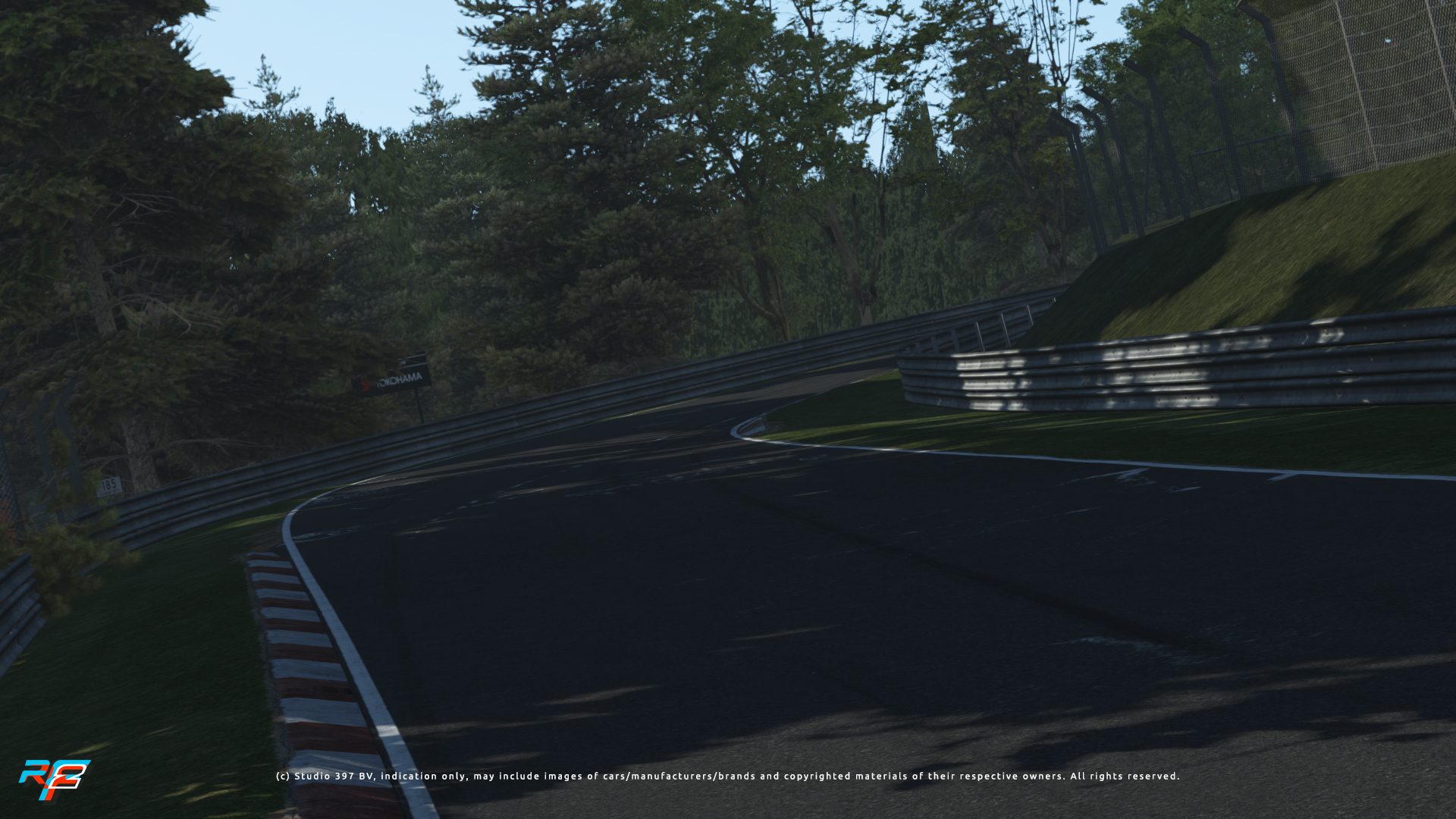 This long straight was named after the high point near the village of Döttingen. 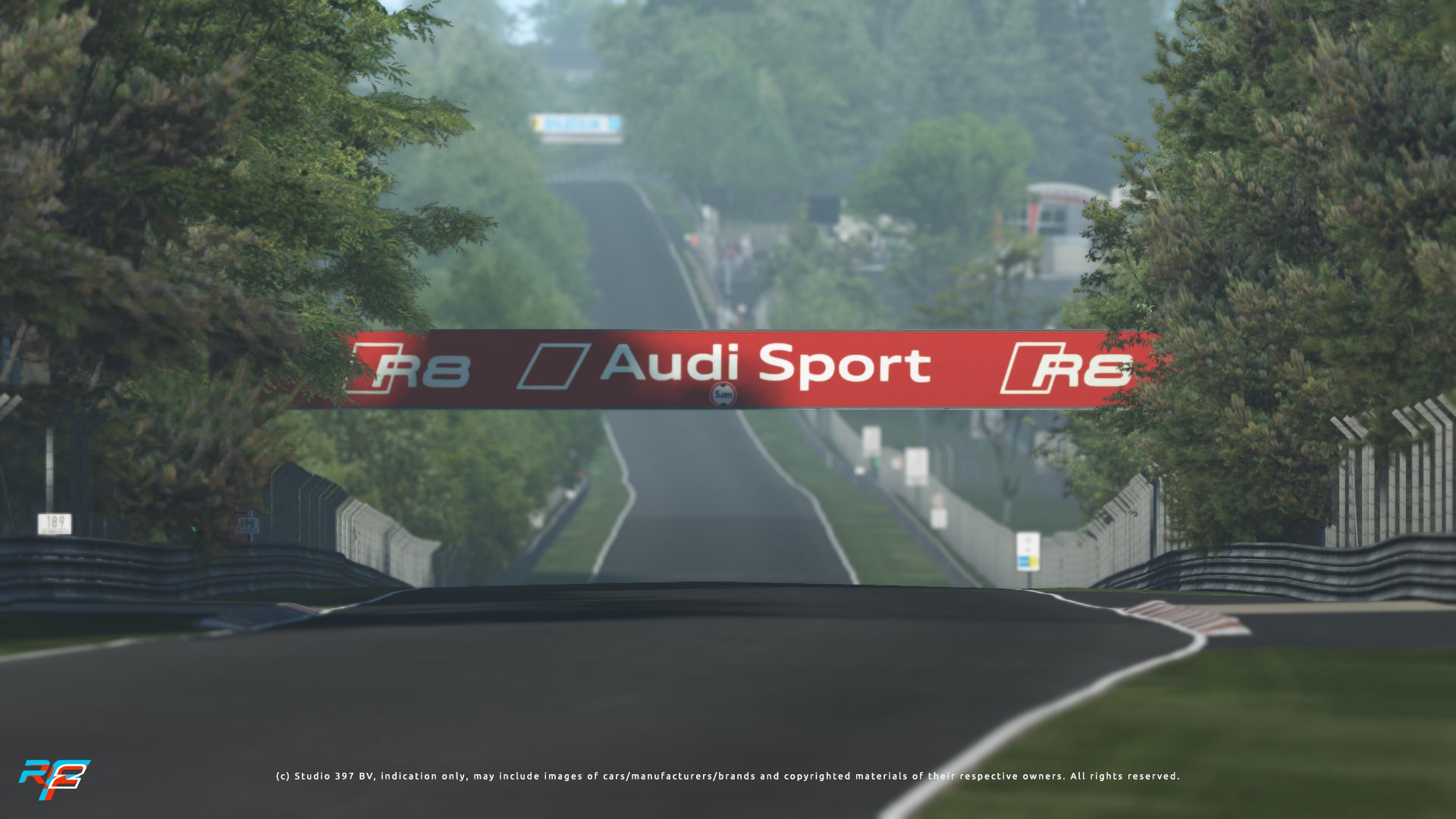 If you’ve made it all the way to the end, enjoy the drive!