It’s summertime, and we are all but on holiday at Studio 397. We’ve passed the half-way mark in August, so it’s time for another roadmap update.

In the last couple of months we have shown you various bits of the new UI. We are now at a point where we have basically incorporated all features of the existing user interface into the new one, with a few extensions. In the upcoming weeks, we will be testing the first beta of this user interface with our testing team. During that phase we not only intend to focus on bugfixing, but also usability testing, so depending on how our testers respond, we might make further changes to parts of the interface. Obviously we can’t predict yet how long this phase will take, but it should tell you that we’re pretty close to a first public beta release. 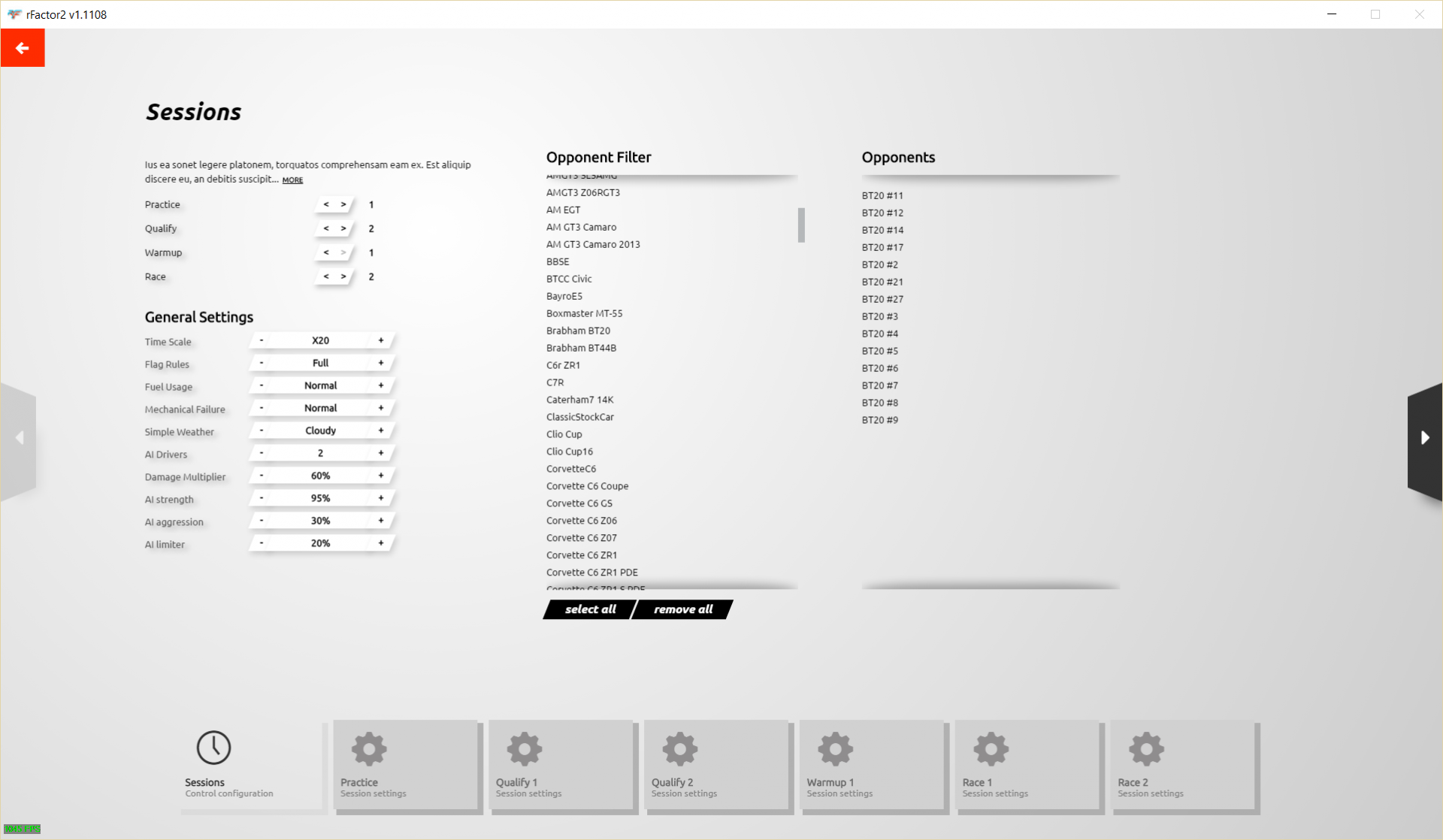 A near final version of the in-game session settings.

The first two rounds of qualification have been completed by now, with the live broadcast of the Zandvoort race coming up on Sunday, so this is a good time to look back at what were basically two very exciting weeks. Last week’s broadcast has seen a combined number of views of well over 600.000 on Facebook and YouTube and the 20 drivers in that race showed some very fast and clean racing. The top 5 finishers ensured themselves a place in the final, so congratulations to them! Many others put in a tremendous amount of time and effort, arguably in the toughest time trial ever seen in simracing. For example, at Silverstone, Miguel Ballester drove 1469 laps to earn his place in the top 20. Our second round at Zandvoort showed that the top 10 in terms of number of laps on average clocked well over 1000 laps. In the first two rounds combined, approximately 260.000 laps were driven. We wish everybody competing in this competition the best of luck!

Number of concurrent drivers on the competition servers for the first and second round.

We’ve also had quite a few questions about the brand new competition system that is hosting all these sessions. It is actually a perfect example of how we were able to leverage some of the existing technologies that have been developed within Luminis. For everything we do, our development workflow starts with setting up a fully automated system to build and deploy code. This allows us to quickly code, test and set live updates. In this case, any code update we push can be deployed to a staging environment for testing within minutes, and with a flick of a switch we can also update our production systems. In fact, our production systems use a method called “blue green deployments” to end up with zero downtime: we deploy each update to new servers, switch traffic from the old to the new ones, and then stop the old servers. Our production environment also has built-in redundancy where we run at least two servers at all times. We actively monitor those servers and if any of them goes down, it immediately gets replaced with a new one. This all happens in the cloud and the system that manages this is called Cloud RTI (run-time infrastructure). 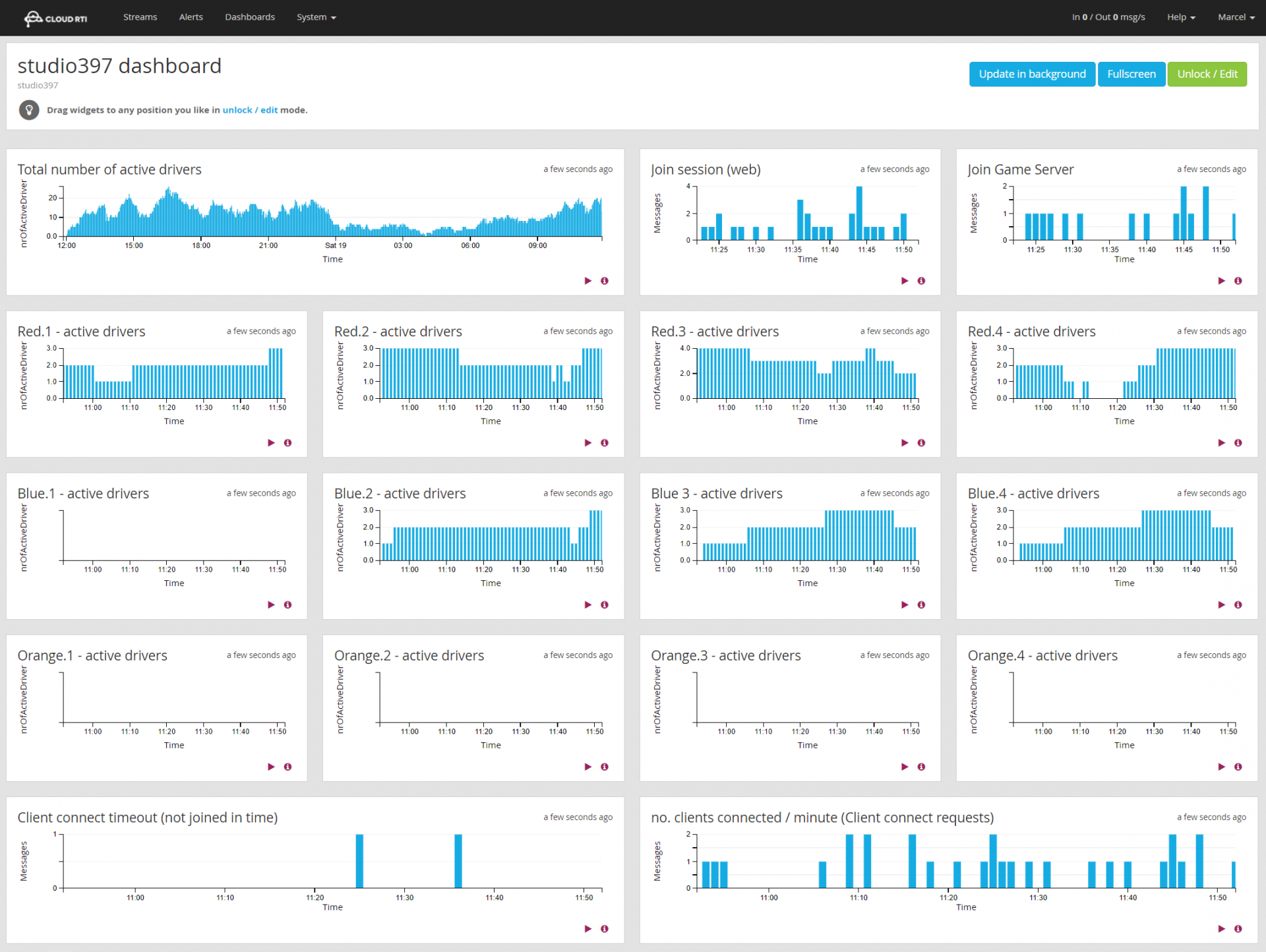 This is the custom monitoring dashboard we use to have a real-time view on competition statistics.

For horizontal scalability reasons, all our server side code is stateless, but of course we want to keep track of a lot of data and statistics. All of this is handled by another product we could leverage, the Information Grid, which is a layer on top of all kinds of data stores that manages the schema of the data and all changes to that schema over time. It allows us to work with data at a much higher level and adds extensive semantics to that data that ensure it stays manageable and usable over a long period of time. Information Grid builds on lots of cloud based data stores and adds security and advanced search capabilities. All of this infrastructure ensures that we can keep our focus on building the features of the competition system, without having to worry about a lot of infrastructural concerns. 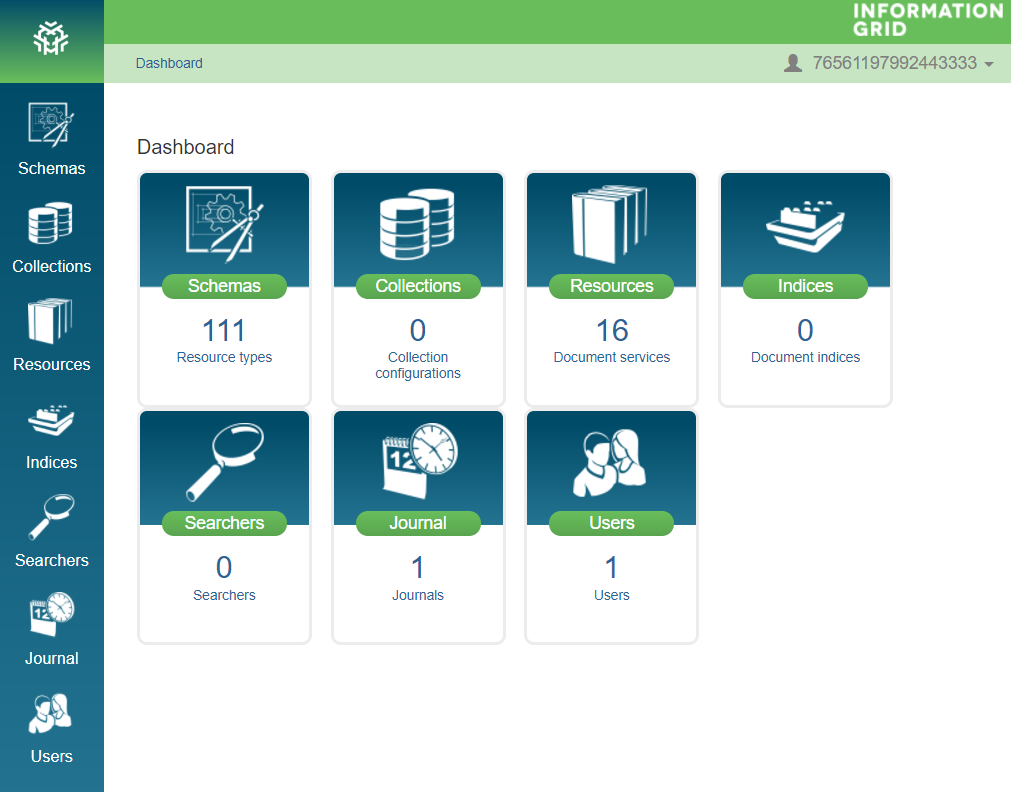 Information Grid dashboard showing some global statistics about the data stores in use.

For the actual code, we leverage another open source project we’ve co-founded with a few other companies: Amdatu. Amdatu is a stack of modular components to build cloud applications. It provides building blocks for web based, modular user interfaces and it is in fact this toolkit that also is the basis of our new in-game UI. As soon as that is ready, you will see the competition and in-game UI merge into one seamless UI that can be accessed both in-game and outside of it. That way you can always keep up with what’s happening in the world of rFactor 2!

As you know, for the competition we released an early version of Zandvoort, dubbed 0.20, indicating it is not finished yet. Although the track already is very drivable and enjoyable, we intend to further improve it over the next couple of months. Also, we’ve learned that for the DTM race this weekend, they repaved the final section of the track, and made some curb changes to the “Audi S” curve, so we’ll probably take a closer look at those for the final version.

In the mean time we have news to share on the licensing front. A lot is going on there, also in terms of tracks, but as a general rule we do not talk about licenses until the deal is sealed. We are proud to be able to announce that we signed a multi-car deal with the Italian race car manufacturer Tatuus. This will bring several of their current racing cars to rFactor 2, which should be very exciting for all the fans of open wheelers!

In May we announced the “open beta” of our brand new DX11 engine and in the following months we have received a lot of feedback and support from the community that have lead to numerous improvements to the performance and visual fidelity. Our plan is to make DX11 our new default at the end of September. At that point we will also update our current demo version. We will keep the DX9 builds in sync until the end of the calendar year. We will continue to improve the fidelity of our DX11 engine, improving every aspect of it step by step, and this process will continue in the years to come. As we discussed last month already, we also fully intend to provide an exciting new solution for plugins to render to the screen as part of this ongoing development and we will look at what information we should really be providing “out of the box”.

That’s all for this month, we hope you enjoyed the update, and enjoy the summer!