We’re nearing the end of the year, which is a good time to start looking ahead at what the new year will bring, but also to look back and reflect on the current year. At the start of 2017 we were still building our team and roadmap, and I think it is fair to say that we did not anticipate all the interesting conversations, partnerships and opportunities that presented themselves in the months that followed. Even though, we knew when we started that there were a few key areas in rFactor 2 we had to address.

The graphics engine needed to be upgraded to DX11 for two reasons. First of all, it enabled us to implement VR. On top of that, from an artistic and technical point of view, it allowed us to start evolving our graphics engine. Of course, we started with a “make or buy” decision as there are obviously existing graphics (or rather game) engines around we could have chosen. Nevertheless, remaining backward compatible was an important goal with our existing content, and we felt that this would have been difficult with a completely new engine. So instead, we chose to build a new DX11 engine, taking the current engine as a starting point. We are now confident that the new engine is more capable and ready for the future. By addressing some of the weak points of the DX9 engine we are building something that is starting to look really beautiful.

We also wanted to replace the existing UI with something that was more maintainable, flexible and future-proof. Throughout the year, we’ve already previewed quite a few screenshots and artist’s impressions, and by now I’m sure everybody is wondering when we will release the first version. The client part of the UI is in private beta testing now, and we are receiving lots of feedback about all aspects of it. During the World’s Fastest Gamer we’ve also previewed parts of the competition infrastructure, at that point still as a separate user interface in a browser, but eventually these parts will also end up in game. We are still working on some other parts, such as the Launcher, the dedicated server and a new HUD and overlay system that is scheduled to replace plugins that were drawing directly to the screen in DX9. It is fair to say that all of these tasks are taking more time than we expected, so bear with us for a little while longer!

The third thing we wanted to do is build high-quality and high-profile content that was properly licensed. A lot of people were also telling us they preferred series over individual cars. So we set out to license five GT3 cars. Finishing them this month was very satisfying and kept us incredibly busy at Studio 397. The GT3 Power Pack includes the previously released McLaren 650S GT3, previously announced Bentley Continental GT3, along with the teased Callaway Corvette C7 GT3-R and surprise Mercedes AMG GT3 and Radical RXC Turbo GT3 cars. As our first pack and DLC this has been a great learning experience, and we’re very grateful to our team, our testers, and you, our customers, for dealing with the pressures and effects that came along with it. We’re very pleased with the results, and hope you’ll enjoy these fantastic vehicles. And one more thing, we are in the final phase of testing an update that addresses the low framerates that some of you have been experiencing with higher quality shadow settings, and we hope to have that released before the end of this week. 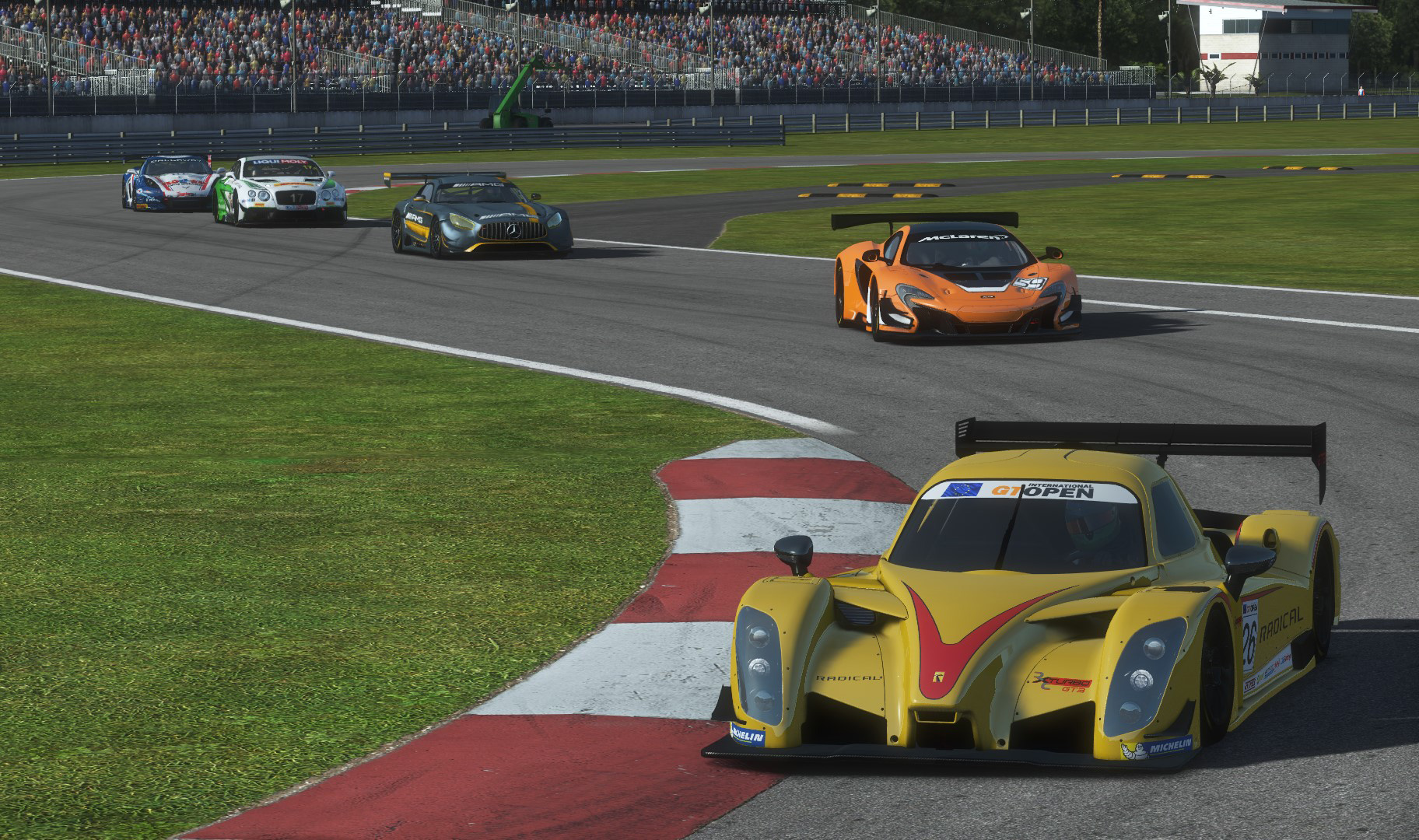 We are already hard at work to come up with the next pieces of content, including a brand new track that is scheduled to be released before Christmas. On top of that, we are also opening up our content store to third parties, further increasing the amount of high quality content and offering our modding community the opportunity to take the next step to convert their passion into something they can make a living out of. If you’re a modder and you’re interested, feel free to get in touch!

As we said in a previous update, we feel our DX11 version is stable by now, so it is our intention to make it the default at our next major code update. That update will include some of the rain and lighting improvements we have previewed at SimExpo, which you can also definitely expect before the end of this year. There are three reasons for the delay here. First of all, we were getting some feedback at the SimExpo that we wanted to improve on. Secondly, some of these changes will also require us to do content updates, and finally, we are working on an improved HUD that contains some of the information that drivers were missing and were installing third party plugins for. As explained above, a completely new HUD system is something we are still working on, and you can expect that sometime next year.

As you already know, our core physics and, more specifically, tyre development is always ongoing. We are continually looking for ways to improve and push things further to get you to that next level of realism! Our own physics developer and tyre guru Michael Borda took some time out to fill you in on the latest in tyre tech, notably, developments that translate into improving tyre feel and overall handling.

“Since the inception of rFactor 2, we’ve calculated centrifugal forces in a ‘quasi-static model’, thinking this simplification was correct or close enough to reality to not require deeper adjustment. It was considered fact, when in reality, accelerations should be calculated localized as the distribution in the contact patch can vary significantly to the original behavior. Some correlation issues crept up over time, and as we’ve collected more data, it became apparent that it wasn’t on the data side. You may think that this might be sloppy, however, the reality is the way data is measured, interpreted (smoothed / adjusted / fitted), scaled, or worst of all, even copied between tyres, makes trusting data a very difficult thing to do. In this case we had strong suspicions that the data was measured under a single condition, simply offset and then applied to different data points. This doubt left plenty of room for us to believe that our model was probably correct, when considering the obvious short-cuts the manufacturer had taken in measuring the data. So everything was rosy, we thought, and then we finally obtained the same type of data from another tyre manufacturer. This time, they went to the extra step of measuring at multiple loads. Once we had this corroborating information, it became obvious there was a glaring issue with our tyre model. Of course, this was an original part of the tyre model that hadn’t been touched for years, taken for granted. This was also a essentially a non-issue before the introduction of the contact patch model. After a little thinking and investigating, it became obvious that our ‘harmless’ simplification, wasn’t so harmless after-all.

To describe the effect in practical terms, after some early testing, it is quite obvious that the ‘speed sensitivity’ of tyres is decreased. A reduction of speed sensitivity, meaning that the tyres lose less grip as a direct consequence of rotational speed. The resulting contact patch is a little bigger (longer), especially when compared to the previous tyres under a combination of both high speed and load. As you apply slip angle, the longer contact patch increases the sliding speed towards the trailing edge of the contact patch, making tyres more prone to overheat at high speed. A larger patch also increases cooling (as contact conductance is the primary driver of heat dissipation in a tyre). In general, tyre temperatures will probably be slightly higher, so you may need to increase conduction slightly to achieve realistic temperatures. In terms of overall feeling, this is the biggest change in rF2 since the introduction of the contact patch model. This also marks the first major change to the QSA model itself.

So now, with the latest newly-released build, we now calculate localized accelerations, and our QSA model, becomes a little bit less “quasi-static” than before.”

More details on this will be published soon as part of an upcoming physics blog, where Micheal will go more in depth on how to leverage these improvements.

Some other things we talked about in earlier roadmaps that deserve an update:

Wrapping up this month’s roadmap I would like to thank everybody for their continuous feedback. A year ago we wrote our first roadmap with our main goal to give everybody more insight into our development. It is fair to say that some things went to plan, others maybe did not, but we still hope this openness is appreciated in the end. Happy simracing!